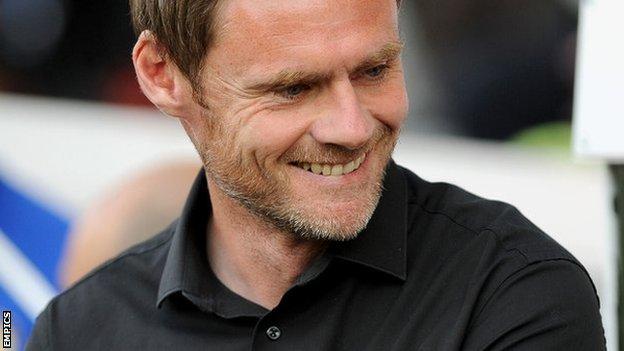 Fleetwood manager Graham Alexander is confident that the side he selects to face Chesterfield on Saturday will be one to test the League Two leaders.

Alexander made six changes to the team that as the Cod Army defeated holders Crewe 4-0 in the Football League Trophy on Tuesday.

A win against the Spireites will put Fleetwood top of the table.

"Now I've got the selection headache but that's where I want to be," Alexander told BBC Radio Lancashire.

"Everyone in our squad has started at least one of the last two games. We go into Chesterfield with everyone having a game under their belt in the previous week.

"They've all shown me what they can do. Whatever team I put out on Saturday, I know it will be a competitive one."

Fleetwood Town are the only team in League Two yet to draw a game this season.

Of their 10 outings, Graham Alexander's side have won seven and lost three.

Fleetwood, who are second in League Two and a point behind Chesterfield, claimed their second League One scalp in cup competitions this season.

Having in the first round of the Football League Trophy, goals from David Ball, Jon Parkin, Nathan Pond and Matty Blair saw off the Alex at Highbury.

"It was a game where we had to be disciplined because Crewe move the ball about very well," added Alexander, who turns 42 on Thursday.

"They overload you in certain areas and, if you don't keep your shape, they can open you up.

"Crewe have had a system in place for many years and they're very good at it. I've been on the end of those games as a player and they're hard work. What we had to do was make sure they had it in positions where we didn't mind.

"We sorted that out eventually, and I thought we looked really good going forward and created numerous opportunities, which was pleasing."