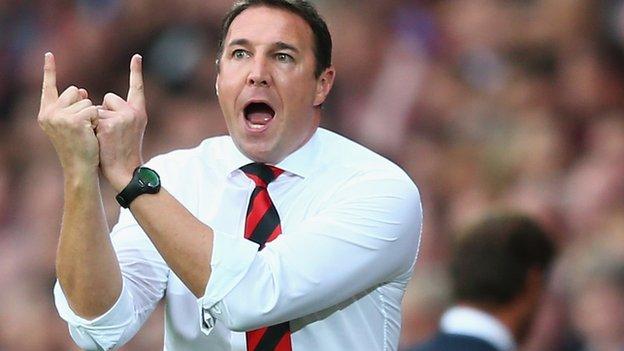 Iwan Roberts has said he is "gobsmacked" by Cardiff City's decision to replace their head of recruitment with an unknown 23-year-old Kazakh.

The club has suspended Iain Moody and brought in Alisher Apsalyamov as his acting replacement.

"I think Malky will be shocked, stunned, angry that this has happened behind his back it seems," he said.

"In the summer Alisher Apsalyamov was on work experience painting the walls of Cardiff City Stadium, watching their promotion games on his laptop.

"Now he's the acting head of recruitment at the age of 23, responsible for Cardiff's next entry into the January transfer window that could determine whether they stay in the Premier League.

"Apsalyamov is, I understand, a close friend of the son of Cardiff's owner Vincent Tan.

"Meanwhile Malky Mackay, Cardiff's manager, has to do without his trusted advisor Iain Moody, who has been Cardiff's head of recruitment for two years and was in charge of the highly successful dealings of the summer that led to some fine players who have helped Cardiff make a solid start in the Premier League.

"I believe that Moody, initially suspended by Mr Tan, has now been placed on gardening leave until the end of the season on full pay so Mackay cannot use someone with whom he has worked productively for the past seven years, first at Watford, now at Cardiff."

Cardiff have yet to make a comment following the suspension of Moody, who Mackay added to his backroom staff following his appointment as manager in the summer of 2011.

Roberts says the loss of a trusted member of the backroom team will be a blow to Mackay, who guided Cardiff to promotion to the top flight for the first time last season.

"I've known both for quite a long time. Iain is a trusted member of his backroom staff. Malky had no second thoughts of getting Iain in as his chief scout when he got the job at Cardiff.

"He's been instrumental in the signings that have been made this summer.

"Iain's hard working, he's good at his job, he's intelligent, and the biggest thing for me, he's trustworthy and that's why Malky holds him in such esteem.

"He will be bitterly, bitterly disappointed and very angry after the way his good friend and trusted aide has been treated."

Apsalyamov is not believed to have any previous experience in football and Roberts is worried by the latest development in the controversial reign of owner Vincent Tan.

Tan caused consternation among many Cardiff fans during the summer of 2012 after changing the club's colours from blue to red.

"Whether Tan is trying to get a reaction from Malky, I think we will find out in the next 24 hours, but distractions like this are not going to make his job any easier whatsoever.

"Is it enough for Malky to walk away? I don't think he will leave Cardiff City but that's just my opinion.

"But I really do think the owner needs to let Malky get on with his job which is managing Cardiff City football club and making sure they're in the Premier League next season."