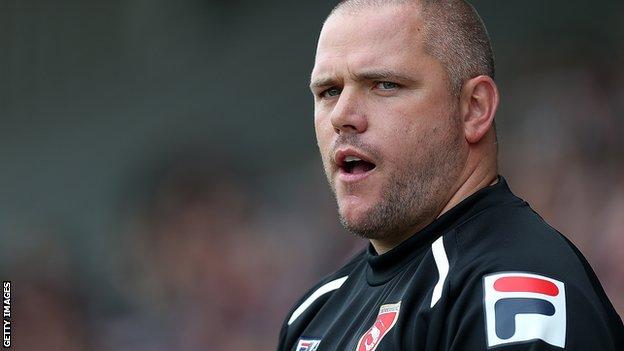 Manager Jim Bentley hopes Morecambe will not be downhearted by their exit from the Johnstone's Paint Trophy.

The Shrimps lost on penalties to League One side Carlisle at the Globe Arena after the 90 minutes ended 0-0.

But Bentley, whose side have not lost in the league since 17 August, was quick to seize the positives.

"We've kept a clean sheet against a side from a division higher and it keeps the unbeaten run going," he told BBC Radio Lancashire.

Jim Bentley's Morecambe have taken 17 points from the last 21 available in League Two.

That run of seven league games unbeaten was capped by a 4-3 home win against Chesterfield on Saturday, having trailed the leaders 3-0.

"I don't take the penalties into consideration. After 90 minutes, we've drawn the game.

"It won't take the wind out of our sails, that's for sure. We'll come in on Thursday and we'll get them fired up to make sure they keep our league run going at Bury."

Morecambe have made an impressive start to the campaign in both league and cup.

They lie sixth in League Two after a on Saturday, their seventh league outing without defeat.

Bentley's side also in August, before exiting that competition in the second round

But Ryan Williams and Andy Fleming failed with their spot-kicks as Carlisle ended their hopes of a Wembley final in March.

"It's always disappointing to lose any game of football, but certainly on penalties when it becomes a lottery," added Bentley.