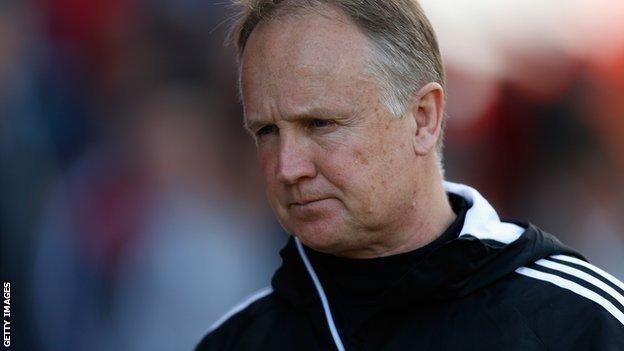 Billy Knott and Matt Bloomfield put the hosts 2-0 up at half-time, and although Brendan Moloney pulled one back for City, it was not enough to stop his side's second-round exit.

"There was complacency from everybody," O'Driscoll told BBC Radio Bristol.

"We got what we deserved from the game, which was nothing."

He continued: "It was poor, pathetic, disgraceful. The worst performance of the season.

Bristol City are without a win in the league all season, a run which dates back to March, but had enjoyed success in cup competitions prior to Tuesday's defeat.

They had beaten Gillingham and Crystal Palace in the League Cup before going out to Premier League side Southampton in the third round, and overcame bitter rivals Bristol Rovers in the Johnstone's Paint Trophy first round.

Following Saturday's 1-1 draw with Port Vale, O'Driscoll made six changes to the starting line-up at Wycombe, but says this should not have affected their performance.

"Certain players came out wanting to play but didn't perform. Nobody can be knocking on my door saying they haven't had an opportunity," he added.

Views from the captain

It was our worst performance of the season. We were flat from the start and we we all know we need to be better.

"We can't just turn up and think because we played well on Saturday at Port Vale it will happen here."

Teenager Joe Morrell was handed his professional debut, aged just 16, and played the first 45 minutes before being replaced Bobby Reid.

But O'Driscoll felt the Wales Under-17 international made a positive impact.

"I felt sorry for him, I didn't want to bring him off but he was playing with people who weren't performing," O'Driscoll said.

"You're asking a 16-year-old to change things and he was one of the ones to take responsibility.

"I'm pleased for him. He's not had a rough beginning in professional football but it's opened his eyes. Hopefully the lessons learned will stand him in good stead.

"He's a bit of a star in his age group, and hopefully this will spur him on to work hard on the things he needs to do."