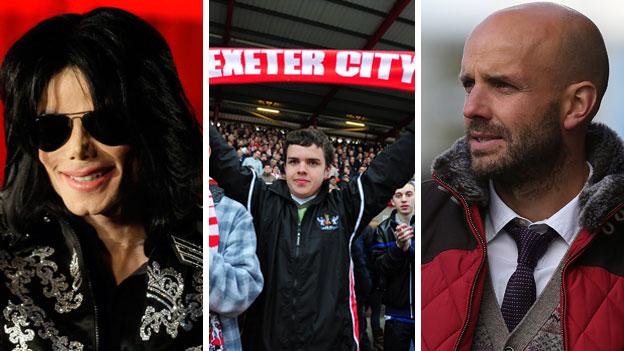 When the list of your club's board members reads more like the upcoming attractions at a Las Vegas hotel, alarm bells should probably start ringing.

With pop superstar Michael Jackson and magician David Blaine as honorary directors and illusionist Uri Geller as co-chairman, the Exeter City of the early 2000s were certainly set up to catch more than a few headlines.

Grecian heroes: some of the key figures of the ECST story*

* with apologies to the many others who space prevents us listing

They were also set up for financial disaster, with heavy debts and financial mismanagement - directors John Russell and Michael Lewis were both convicted of fraudulent trading in 2007 - pushing the club to the brink of collapse, until the intervention of the supporters' trust.

This weekend will see the 10th anniversary of the Exeter City Supporters' Trust (ECST) taking ownership of the club celebrated against Hartlepool. The contrast between now and then is stark.

With no debt, the Football League's longest-serving manager in Paul Tisdale and a successful academy system, the Grecians are now a byword for continuity, stability and most of those other attributes usually considered desirable in football clubs.

But at the turn of the millennium the club was in chaos with bizarre board appointments offering little distraction from ongoing financial difficulties.

"I was listening to the radio and someone said that with Uri Geller and co involved, all we needed was Coco the Clown to complete the set," Julian Tagg, a key figure in the early days of the trust and now a club director, told BBC South West Sport.

"As an Exeter boy through and through that hurt. He was right, we were a laughing stock."

ECST was set up - with no intention to own the club - in 2000 by fans with misgivings over the direction things were taking. But as Exeter's situation unravelled, trust members began to raise their ambitions.

"After a meeting with the directors Russell and Lewis, it became evident our views and their views diverged quite considerably," said Dr David Treharne, another significant figure in ECST's story.

"We had 211 members and about £11,000 in the bank but as 2003 panned out, particularly once Russell and Lewis were arrested, it seemed the trust was the only player left in the game."

On the pitch, things were not much better. Relegation to the Conference came in 2003 and majority shareholder Ivor Doble asked the trust to take over the day-to-day running of the club. Trust pioneers Treharne, Tagg, Terry Pavey and Ian Huxham - not to mention dozens of volunteers - came together to try to sort out the mess.

Having made a reasonable fist of things in trying circumstances, the trust decided to take on the ownership of the ailing club. Treharne and Martin Ellicott went to Doble's jewellers in Exeter in their lunch break and handed over a cheque for "pretty much everything the trust had".

"We looked at each other and said 'what have we done?'," added Treharne.

With the police having confiscated large quantities of financial documents, it took time for the true scale of the problems to emerge. Debts proved to be closer to £4.5m than the £2m that the best-educated guesses of trust members had supposed. Almost immediately the club entered a Company Voluntary Arrangement.

"There were lots of dark moments, but also a real will that the club should survive," said Treharne. "It suddenly struck us how important the club was to people."

And then that old cliche - the magic of the Cup - came good. Still in the Conference, Exeter were drawn against Manchester United in the 2004-05 FA Cup and secured a 0-0 draw in front of 67,551 fans at Old Trafford against a side containing Phil Neville and Gerard Pique, with Cristiano Ronaldo and Paul Scholes coming off the bench.

The televised replay at St James Park ended in a 2-0 win for United but the two games had virtually cleared Exeter's debts.

With something of a clean slate, Exeter, now with Tisdale appointed manager as successor to Alex Inglethorpe, could look ahead with optimism and the return to the Football League was achieved via the play-offs in 2008. Promotion to League One followed the next season.

The Grecians are back in League Two now but flying high in third place under Tisdale.

"Paul's been massively important - he really buys into what we're doing," said Tagg of the manager second in longevity to only Arsenal's Arsene Wenger among all 92 Premier and Football League clubs but who operates on a minute fraction of the Frenchman's transfer budget.

"It's in the way he carries himself, the way the team plays and the sportsmanship he encourages."

"Exeter are one of the most important stories in the history of football fan-ownership but are often overlooked because it's become the norm.

"They were trailblazers and have been a very important part of what, for example, Wrexham and Chester have done.

"They've demonstrated what we think football clubs should be all about - a long-term proposition for people who care about the club."

Andy Bratt, another ECST official, agreed: "You might find the odd fan who thinks he should be throwing boots around the dressing room or something but I think the vast majority know what an exceptional manager we have."

The trust has evolved over the years, helped by regular elections and maximum terms for officials, and Bratt explained how it operates on a day-to-day basis now.

"We're a trust-owned club, not a trust-run club," he said.

"People like retired clinical psychologists [Bratt's former profession] cannot run football clubs. Obviously if we felt things were going seriously wrong we could pull the plug but we have really good staff at the club working crazy hours.

"You would never expect the relationship to be completely smooth. There are some fans who think the trust should be kicking backsides but actually the trust has an enormous influence over the way the club works because they respect our opinion and vice versa.

"The mantra is 'we only spend what we have'. I think our club chairman Edward Chorlton will have that on his gravestone when he passes away!"

Tagg insists there is a bigger picture to consider as well as simply the survival of a football club.

"It's not just about the football - it's about representing the city and upholding the name of Exeter," he said.

"Football is so powerful as a way of getting through to people and it's important the club portrays itself in the right way.

"But it's hard work. It's a bit like having young children. You go to a wedding and everyone says 'aren't they gorgeous?' But of course there's the changing nappies and getting up at two in the morning.

"We're far from perfect and there's probably another 10 years' work involved in getting into the shape we would like to be in."

Bratt and Treharne agree that there are significant challenges on the horizon, not least the development of St James Park but also keeping the momentum of the trust going.

"The trust launched in a blaze of glory, but it's hard to keep that enthusiasm going a few years down the line," said Bratt. "Really it's incredible that we haven't haemorrhaged members.

"And our stadium is no spring chicken. Our away end is one of the worst in the country and embarrasses us when fans have to stand there in the rain."

Treharne added: "The trust isn't finished business. It's still a work in progress but 10 years of running the club is testimony to the fact that it can work - in my personal view it can still work better.

"If people want to support a Chelsea or a Man City then they can, but I think if you talk to the majority of Exeter fans, they think the club is something special and needs to continue to live on through the trust."