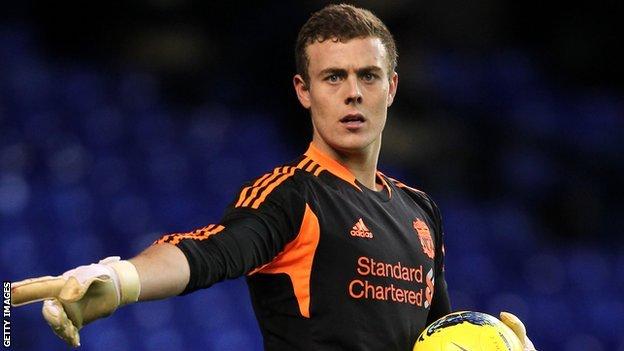 The 19-year-old was a late call-up for the second round clash with Plymouth, after first-choice Wes Foderingham was taken ill with a sickness bug.

After conceding an early goal, Swindon went on to win Tuesday's tie 2-1.

"I thought he did very well. He was calm, made some good saves and took some good crosses," said Cooper.

"It was a very late [decision]. Wes was taken sick in the warm up and got progressively worse, so Ty had to play.

"The thing we were looking at was whether he could do it in the first team and he certainly showed he can."

Belford came through the Liverpool academy and joined Swindon on a two-year deal following his release by the Premier League club this summer.

He had a difficult start to his senior debut when Andre Blackman's shot deflected in to the net to put Argyle ahead after only six minutes.

But Jack Barthram's header levelled the score and Nicky Ajose curled the ball in from the edge of the area to send Swindon through to the area quarter-finals.

Prior to the game, Cooper had complained that, under Football League rules, he was not able to make more than five changes from the team that beat Tranmere in League One on Saturday.

But he told BBC Wiltshire he was pleased with the effort of the players he brought in.

"It was good that we were able to change one or two things round and still get through the tie. We're trying to get people as many minutes as we can and keep the run going."

Cooper added: "It wasn't our most scintillating performance, especially in the second half. But full credit to Plymouth, they played well and made it difficult for us.

"We got through without too many scrapes and managed to have a look at one or two of the fringe players."