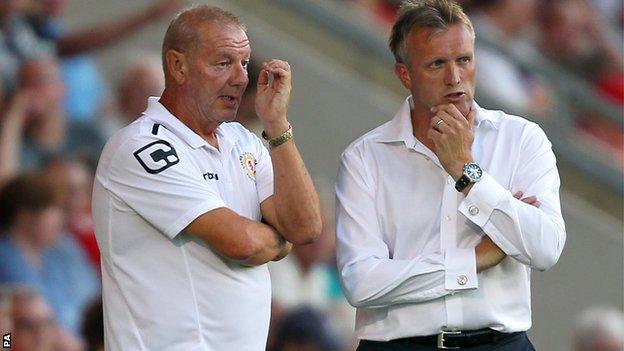 The Railwaymen were beaten 4-0 by Fleetwood Town on Tuesday and have now lost four of their last five games, conceding 15 goals in the process.

"We haven't hammered the lads, they've had enough of that already - they don't need it," he told BBC Radio Stoke.

I think the fans are puzzled. They can't work out how a decent team have lost 11-0 for the last three matches.

"They're already so disappointed, they really need the coaching staff's help."

As well as winning the Johnstone's Paint Trophy last term, boss Steve Davis led them to a comfortable mid-table finish on their return to League One after a three-season absence.

But this season they have endured a difficult start, winning just one of their 10 league matches, form which has left them fourth-from-bottom.

That solitary victory came almost two months ago when they

Alex defence all at sea

"People say footballers don't care enough," said Baker. "But go into the dressing room and you'll see they do.

"They've put a lot of hard work in and the bright spot at the moment is that I think the supporters know that.

"The fans stayed with the team even when it was 3-0 against Fleetwood because, if you watched the game as a whole, there was no way we deserved that scoreline.

"I think, like us, the fans are frustrated and puzzled. They can't work out what's gone wrong because we're a decent team but have lost the last three matches 11-0."