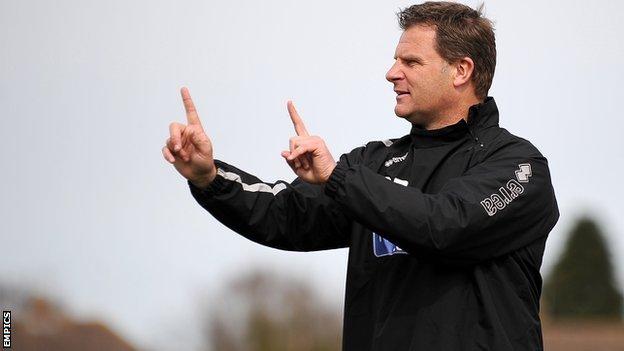 And England captain Stoney, 31, has urged the club to prove their ambition before committing for next season.

"We are working tirelessly to keep our best players and I am optimistic we will," Passmoor told BBC Sport.

"We probably need around half a dozen players to compete in the top four, and also two or three younger players at around the 17-19 age group."

Stoney and fellow England internationals Sophie Bradley and Jess Clarke all signed 12-month deals last year, with the option for a second year.

And the club are eager for the trio, as well as England goalkeeper Karen Bardsley, to form the backbone of the team next term.

We probably need around half a dozen players to compete in the top four, and also two or three younger players at around the 17-19 age group

The Lady Imps, whose controversial re-branding as Notts County Ladies was announced in April, reached the Continental Cup final before losing to Arsenal.

And Passmoor, who took over in February, said there were definite signs of progress, although the lateness of his appointment limited player recruitment and meant having a smaller squad at his disposal than he would have liked.

"This season has been tough," he admitted. "We wanted respectability and I think we achieved that with some good results and a couple of good cup runs where we were punching above our weight.

"But our league form has shown some deficiencies in the strength of the squad. We had great team ethics, spirit and togetherness but that can only can take you so far.

"We were short of numbers last season and had lots of injuries to cope with too. Players were having to play through injuries."

Passmoor strongly believes the move to Nottingham after 18 years as Lincoln Ladies will help them attract more players and give them a much better foundation to challenge the league's top clubs.

"I am confident we will get players to come to the club next season," he added. "But it will be a manic couple of months driving up and down motorways, finalising contracts, getting players re-signed and signing new players."