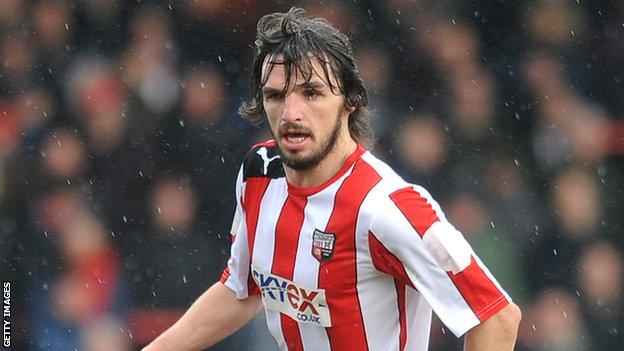 Jonathan Douglas says he expects Brentford to string a run of results together in League One soon.

The Bees are yet to win back-to-back league games his season and have lost three of their opening 10 matches.

The 31-year-old midfielder told BBC London 94.9: "Some games we have been unlucky and we probably haven't got the results our performances merited.

"We have got a good squad together and we have got great belief. It is only a matter of time before it happens."

He added: "Last year we went on a few runs of winning the odd three or four games. I think it is time to start doing that now.

"We need to start picking up as many wins as possible."

Brentford, who lost in the League One play-off final last season, are currently tenth in the table.

Last week goalkeeper Richard Lee said the side must not "need to get too disheartened" with their start to the campaign, and Douglas is also remaining confident.

"We have got a player for every position capable of playing in any team in the division and have good competition," the former Republic of Ireland international said.

"It is a matter of keep believing in what we do on the training ground and then the results will take care of themselves.

"I have been watching a lot of games and we have been on top but not been creating the killer chances or the goals. With the strikers at the club, it is only a matter of time but we need the midfielders to chip in and take the pressure off them.

"It is my third season here and I have great belief in the lads."

Douglas made his first appearance of the season in the Johnstone's Paint Trophy defeat to Peterborough on Tuesday after missing the start of the season following knee surgery.

"It has been a massive five months working up to that," he said. "I'm delighted to come through it and my knees feel good so far.

"Thankfully I am back fit now and everything is going well."