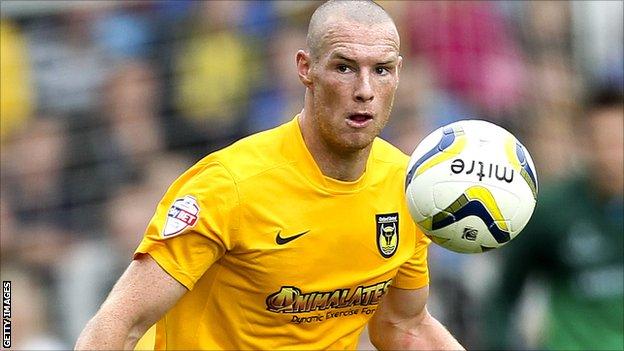 Oxford United striker James Constable feels despite losing 2-1 to Portsmouth in the Johnstone's Paint Trophy their performance should give them optimism.

Strikes from Patrick Agyemang and John Marquis gave Pompey victory, before Constable, 29, marked his 200th start with his 97th goal in the final minute.

"I just hope we go into Saturday's game [with Northampton] full of confidence after our first-half display."

He continued: "It was nice to get the goal. Shame we couldn't have done better in periods.

For sure, we are near the top of the league, why not? I mean, what 19-year-old doesn't want to get promotion?

"First half we played really well and second half not as good as we should have done, but we dominated a very good side."

Youngsters Calum O'Dowda and Josh Ruffels and Australian loanee Ryan Williams all started the match, and Constable believes the trio made a positive impact despite the second-round tie ending in defeat.

"They are desperate to play football and they've worked hard for their chance," Constable added. "Like I say, everyone is just bitterly disappointed we haven't managed to get the right result."

One of the players to impress in Tuesday's defeat - Williams - says he is open to prolonging his time at the Kassam Stadium beyond the six-month spell agreed by his parent-club Fulham.

The 19-year-old winger impressed in his third start for the U's against Portsmouth and is now keen to build on that performance and would consider extending his stay if asked by United.

"It was a bit frustrating at the start because I was not playing that much," Williams told BBC Radio Oxford.

"Now I am starting to play and show what I can do and hopefully I can carry that on and stay in the team.

"It takes players a couple of months to settle in, I've got another three months left and hopefully I can play as many games and if it goes well I can extend it and if it goes sour I've had fun here.

"For sure [I would consider extending it], we are near the top of the league, why not? I mean, what 19-year-old doesn't want to get promotion?"

Meanwhile, the U's have confirmed that Jonathan Meades has suffered a fitness setback and has undergone ankle surgery.

The Welshman has yet to start a competitive game for the club after injury problems kept him on the sidelines since his summer move to the Kassam Stadium.