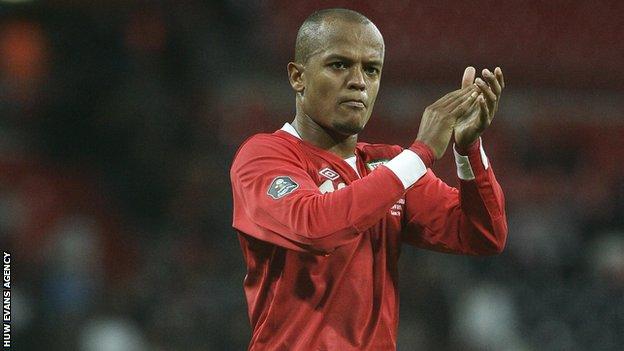 Striker Rob Earnshaw says he is still available and eager to play for Wales.

Wales manager Chris Coleman is because of injury for the World Cup qualifiers with Macedonia in Cardiff on Friday and then Belgium in Brussels on 15 October.

Earnshaw, 32, is the leading scorer for Toronto FC in Major League Soccer this season, with seven goals in 24 games.

"I'm available for Wales, I want to play for Wales," said former Cardiff striker Earnshaw who has 58 Wales caps.

"I'm only 32, I feel great, I've had a good season here and I feel like I've got something to offer.

"I've scored a few goals over here, so I'd hope that gives the sign I'm still available and still willing to give something for my country."

Wales manager Chris Coleman's options in attack for the two qualifiers have not been hit as hard by injury as his defence and midfield.

But in the current campaign no player has been able to cement their place as an out-and-out striker in the Wales side, while after the game against Belgium.

Earnshaw, who has scored 16 goals for Wales, joined Toronto in February 2013 on a free transfer having been released by Cardiff.