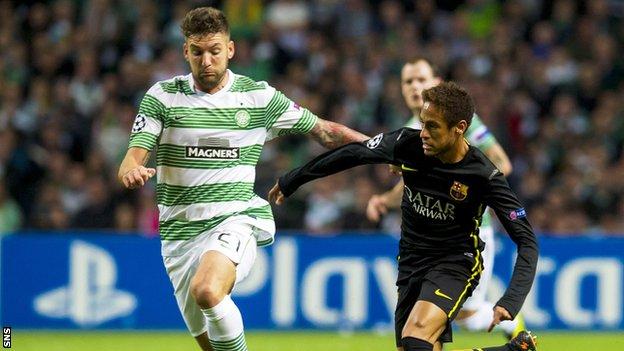 BBC Sport has analysed the changing composition of British football.

Click here for a full breakdown of the figures

The number of minutes played by Scots in the English top-flight has gone up slightly to 3.27% over the last five years, while the same figure in Scotland is marginally down at 57.19%.

"We want as many Scots playing at the highest level as possible," said Brown.

"That would be in the Champions League at club level."

Scotland internationals Scott Brown, Kris Commons, James Forrest and Charlie Mulgrew are part of Celtic's current Champions League campaign but Manchester United's Darren Fletcher, currently recovering from a lengthy illness, is the only other prominent Scot likely to feature in the elite competition this season.

English representation in the Scottish Premiership has risen from 10.4% to 16.41% since the 2007-08 season, the campaign which preceded a European Championship for which none of the home nations qualified.

Scotland have not reached the finals of a major tournament since the 1998 World Cup in France, during Brown's reign.

In order to boost the fortunes of the national side, the Scottish Football Association in 2011

The former Southampton manager has

"We're starting at the bottom of the pyramid. We're creating 400-500 very well-educated football players but then the clubs have to put them in first-team football and have to tweak the final part of their elite player development.

"I'll only be pleased in 2020 when we see the result of this performance project," said Wotte last year.

If recent trends are to continue, the higher salaries on offer in England are likely to attract Scotland's better prospects, with Johnny Russell - who moved from Dundee United to Derby County this summer - one of the most recent exports.

Some youngsters, including Russell's former Tangerines team-mate David Goodwillie - who struggled at Blackburn and has since gone back to Tannadice Park on loan - have found first-team football hard to come by and returned to their homeland.

"A lot of players have gone from Scotland too early, too young," said Brown.

"They don't give themselves the chance to hit the really top-notch level and then go.

"We want as many as possible to be playing first of all in Scotland, and hopefully with more Scottish teams playing at a good level in Europe.

"But if not [in Scotland, we want them to be] at the top level in England."