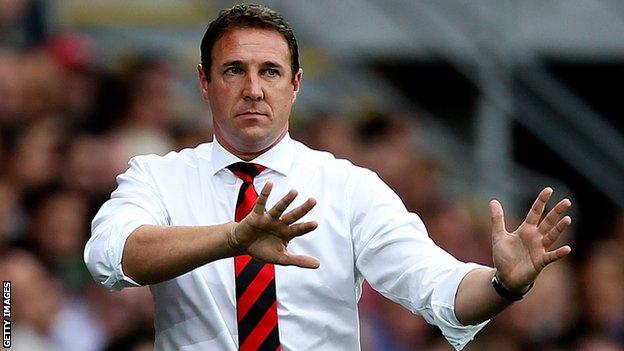 Cardiff City have called a board meeting for Monday following their decision to place head of recruitment Iain Moody on gardening leave.

The club have denied reports they asked manager Malky Mackay to resign after his right-hand man was suspended, with 23-year-old Alisher Apsalyamov brought in as his acting replacement.

It is understood Mackay, 41, has given up hope of keeping Moody at the club but won't leave himself.

"Simon Lim [Cardiff chief executive] left for a 10-day holiday in Malaysia at the height of the crisis that led to Moody, Mackay's head of recruitment being placed on gardening leave with the angry manager's future left in the balance.

"But Lim has been ordered back by the chairman Mehmet Dalman and he'll have to justify himself at Monday's board meeting, which is not expected to be attended by the owner Vincent Tan.

"Mr Dalman, a highly respected investment banker with a working knowledge of football, is based in London. He has a good relationship with the manager and he's now trying to establish what's going on at the club.

"I understand Mackay accepts Moody won't get his job back but he won't resign. He's determined to focus on his players, not the politics, but we will be at that crucial board meeting."

Apsalyamov is not believed to have any experience in football and his appointment is the latest controversy in the reign of owner Vincent Tan.

The Malaysian caused consternation among many Cardiff fans during the summer of 2012 after changing the club's colours from blue to red, while there have been reports of dressing-room unrest over bonuses.

"Fans want Malky Mackay - who has done a fantastic job as manager, taking the club to the Premier League - to remain at Cardiff City," Hartley said.

"We don't want to see any action taken to undermine his position as manager and Cardiff City's efforts to have a successful first season in the top division.

"There are fears that the current developments could drive Malky into the arms of another Premier League club and that would be hugely damaging.

In Mackay's first season in charge Cardiff reached the Championship play-offs, but lost to West Ham in the semi-finals

"Fans deserve a clear statement on the position from the club on what has been happening and Malky's position needs to be made perfectly clear."

"It is a very, very strange situation," said Taylor, who was Watford chairman and worked with Mackay and Moody at Vicarage Road.

"It will be interesting to see what Malky's reaction is. I do hope this doesn't have an adverse reaction on the team's performance and results.

"He is the manager and he has just got the club into the Premier League after such a long time out of it.

"I don't think you will see any public tantrums from Malky or anything like that [but] I know he will be extremely upset and disappointed."