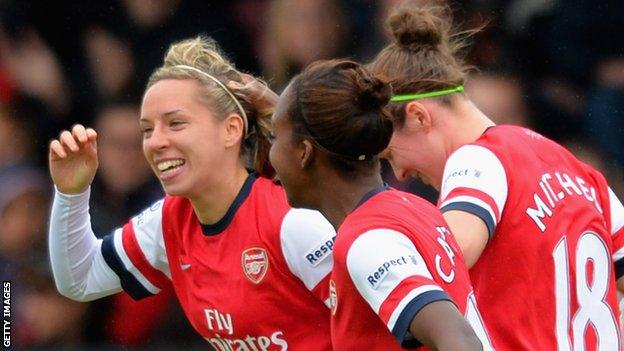 Arsenal beat Kazakh side Kairat 7-1 in the first leg of their Women's Champions League last-32 tie.

The Gunners, who arrived in Kazakhstan only seven hours before kick-off, led 3-0 at the break through Kim Little, Danielle Carter and Jordan Nobbs.

Katie Chapman and Rachel Yankey added to the goals in the second half.

Road to the final

The lower-ranked champion clubs compete in four-team, one-venue mini-tournaments hosted by one of the competitors.

The qualifying-round winners join the teams given a bye past that stage in the last 32. From here to the conclusion of the semi-finals, the competition consists of two-legged knockout ties. If scores are level after 90 or 120 minutes of the second leg, the team with more away goals wins, otherwise a penalty shootout is held.

The final is a one-off match held two nights before the men's Uefa Champions League final in the same city. The 2013-14 edition concludes in Lisbon.

Birmingham went out of the competition at this stage last season, beaten 3-2 on aggregate by Italian side Torres after winning the first leg 2-0 at home.

Arsenal's goals arrived after the exertions of the journey, which included an eight-hour overnight flight, seemed to affect the Continental Cup winners' finishing in the early stages.

That led to further goals from Carter in the 43rd minute and Nobbs 60 seconds later.

Chapman and Yankey made it 5-0 and although Kairat reduced the arrears through Olga Aniskovtseva. Little grabbed a second before Freda Ayishi's strike.

The Kazakh champions visit Borehamwood next Thursday for the second leg.

Both of Lappin's goals for Glasgow were equalisers, the first levelling midfielder Vanity Lewerissa's opener and the second cancelling out striker Tessa Wullaert's goal.

But two away goals could prove vital for the return fixture.