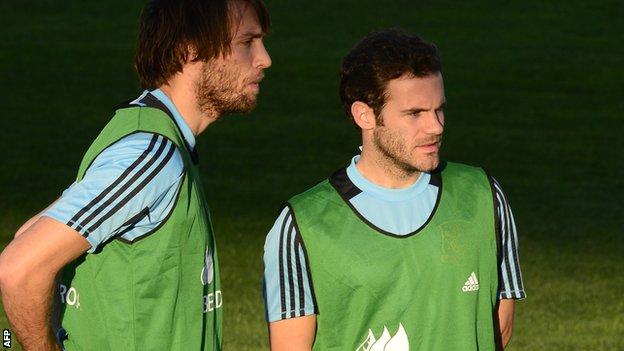 Swansea City forward Michu says he owes a great debt to manager Michael Laudrup after being called-up by Spain.

Michu was signed by Laudrup from Rayo Vallecano for £2m in July 2010 and has scored 27 goals for the Swans.

The 27-year-old was added to the Spain squad as a replacement for injured Atletico Madrid forward David Villa, preferred ahead of the likes of Tottenham's £26m buy Roberto Soldado.

"It's because of Michael Laudrup I am here," Michu told the Swansea website.

"He is one of the best managers I have ever worked with in my life."

Michu was a revelation in his first season for Swansea, scoring 22 goals during a campaign in which the club won the Capital One Cup.

The Oviedo-born player was watched by Spain head coach Vicente del Bosque last season but has had to wait until now for his first international call-up.

That has come as a result of an injury to Villa, with Del Bosque selecting Michu ahead of Soldado and Juventus forward Fernando Llorente.

Spain, who host Belarus on Tuesday and Georgia next Tuesday, are guaranteed to finish in the top two of their group along with France.

But the reigning world champions need four points from their remaining two home games to be certain of automatic qualification.

Michu said Chelsea midfielder Juan Mata had been a great help during his first few days with his national side.

"I can't describe the feeling when I went into the pitch wearing the shirt of the best team of the world," Michu added.

"But it is very easy to play with all these players. The players who are in the squad are the best in the world and they're at the maximum level.

"There is a lot to learn from them and obviously they make you play better at a higher level.

"For all footballers, to play for your country is the best. It is the biggest achievement in my career. I came here to enjoy and to try to qualify for the World Cup.

"I was quite nervous but now I am enjoying every training. If I have the chance to play, it will be good. I will be very happy if it happens."