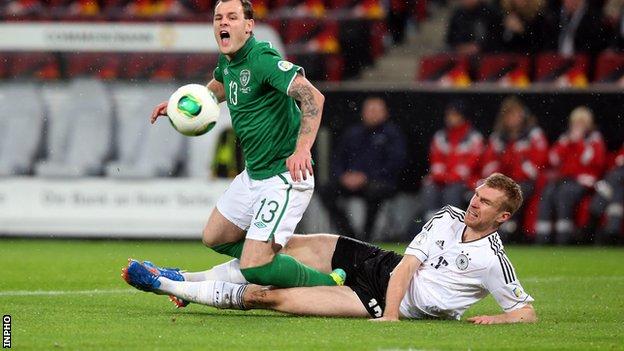 The Republic of Ireland's faint hopes of making the World Cup qualifying play-offs ended with defeat by Germany, who sealed their place in the finals.

Andre Schurrle slotted in to make it 2-0 and Jerome Boateng hit the bar before Mesut Ozil chipped in a late third.

Seven changes to the Republic team included the absence of Robbie Keane, who was on the bench after struggling with an ankle injury.

As expected, Germany pressed with the visitors defending in depth and Khedira made the breakthrough after 12 minutes.

Thomas Muller was then denied when Forde tipped over his fierce strike from 25 yards.

The Republic almost grabbed an unlikely equaliser in injury-time, with Clark heading against the bar from Glenn Whelan's cross and Stokes failing to connect with the rebound.

Stokes was inches away from scoring just seconds into the second half with his low strike from 20 yards flying across a diving Manuel Neuer and wide.

Neuer tipped over another effort from the Celtic forward and James McCarthy fired over as the Republic enjoyed their best spell of the game.

The German keeper almost gifted the Irish an equaliser, his mishit clearance leaving him stranded 30 yards out but Stokes was unable to find an open goal from wide on the left.

Germany regained control and doubled their lead on 58 minutes with Toni Kross picking out Schurrle, who beat the offside trap before netting with a neat turn and shot.

Forde was at full-stretch to keep out Bastian Schweinsteiger's shot before Neuer saved low to deny Stokes.

Khedira's curling shot was pushed wide by the heroic Forde while Boetang rattled the bar from long-range with eight minutes left.

The Republic created two late chances with Stokes firing straight at an advancing Neuer before the keeper punched over from a Clark header.

The Germans had the final say, breaking forward from an injury-time corner with Ozil lifting the ball over a grounded Forde and into the net to complete a comfortable victory.