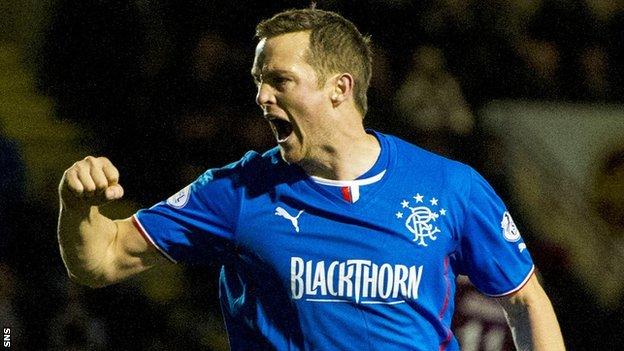 The 75th-minute goal came just after Darren Smith had missed an opportunity to give the home side a surprise lead against the League One leaders.

But overall Rangers deserved their place in the April final with Raith Rovers.

Rangers manager Ally McCoist has spoken of his determination to win the trophy for teams outside the top flight - and he named the same starting 11 that defeated East Fife 4-1 in the league at the weekend.

It looked like the goals would soon flow again as Rangers piled early pressure on the side they hammered 8-0 in last month's League One meeting at Ibrox.

An Ian Black free-kick just evaded the unmarked forehead of defender Bilel Mohsni - the summer arrival looking to add to his four goals in the last six games - and Smith spilled the ball on the goal-line before it was scrambled clear.

Rangers ought to have had a penalty when Daly was tackled from behind by Eddie Malone, while Mohsni headed wide from eight yards.

Hampered by the loss of suspended top scorer John Gemmell, it took the home side 27 minutes to create a chance, and even then Sean Higgins curled his 18-yard free-kick well over the crossbar.

At the other end, Arnold Peralta's powerful 35-yard effort struck the underside of the bar and, when Daly returned the ball into the six-yard box, Nicky Law headed wide.

Law was only marginally closer to goal than the Honduras winger when he let fly with a drive that whisked off the paintwork and over for a goal kick.

Stenny had a new-found vigour after half-time and Sean Lynch, who had come into the side along with fit-again captain Ross McMillan, fired high into the stand after finding himself in space on the edge of the penalty area.

Soon afterwards, Brown Ferguson, who had come on after only 14 minutes for the injured Bryan Hodge, saw his powerful shot saved by Rangers goalkeeper Cammy Bell.

Ferguson set up what should have been the opening goal when he played a one-two with Darren Smith and, after the midfielder chipped over the advancing Bell, his team-mate's attempted back-heel from five yards skimmed wide.

With 15 minutes left, Stenny keeper Smith turned villain when he needlessly came out to the edge of the area in an attempt to claim a Mohsni cross only to be beaten to it by Daly's goal-bound header.

Stenhousemuir could not respond and were lucky not to fall further behind when Kevin McKinlay cleared off the line from Law and a Lee McCulloch header rattled the crossbar.