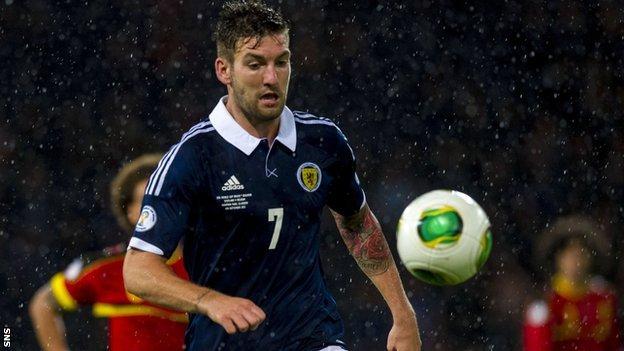 Charlie Mulgrew believes beating Croatia would be "massive" as Scotland seek to finishing their World Cup qualifying campaign on a winning note.

Croatia visit Hampden next week in what will be Scotland's last competitive match before the Euro 2016 qualifiers begin next year.

The Scots won the previous meeting of the two sides in Zagreb.

"It would be nice to finish with a good result and it would give us confidence in the next campaign," said Mulgrew.

"The last wee while has been pretty good so we want to end the campaign on a high.

"There was a lot of hard work that night [in Croatia]. The manager put his ideas across and the team carried them out very well.

Mulgrew, who has played in defence for much of his career, has featured in midfield in recent matches, including Scotland's win in Macedonia and Celtic's Champions League defeat by Barcelona.

"Different players pose different challenges and playing against the types of players I played against last week, [Barcelona's] Xavi and Iniesta, the challenge with them is to get a kick of the ball," said the 27-year-old.

"But it gives you a lot of confidence and you have to take that into international football.

"Playing against Croatia, there is Luka Modric and other players like that who are world class.

"In the last couple of games I have played in centre midfield for club and country with Scott Brown but I don't know what the manager is thinking for the Croatia game, we will have to wait and see."

Both of Scotland's wins so far in the campaign have been away from home with only two points taken at home.

"To qualify for any major tournament, you've got to have good home form," added Mulgrew.

"We'll be looking on this game towards the next campaign to hopefully get a good result and prove we can get results at home as well."