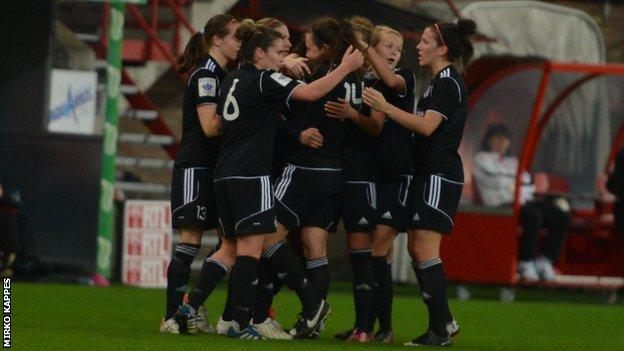 Suzanne Lappin scored twice as Glasgow City fought back to claim a draw with Standard Liege in the first leg of the Women's Champions League last 32 round.

Vanity Lewerissa netted to put the Belgian side ahead but Lappin volleyed a leveller shortly before half-time.

Tessa Wullaert's tap-in put the hosts in front again five minutes into the second half only for Lappin to fire a second away goal for City.

The two sides meet in the return leg in Glasgow on Thursday 17 October.

The team that progresses will meet the winner of the SSHVSM Kairat-Arsenal tie, with the English side leading 7-1 after the first leg.

"To get goals to take back is pleasing for us," Lappin told BBC Scotland. "It means that we're still in the tie and hopefully we can go on and finish the job off next week.

"We showed a lot of character to come from goals behind on both occasions.

"But we've got to take the positives from it; that we've scored two goals away from home in Europe against a good quality side and we'll just need to work on things for next week.

"We need to perform and play at our best for 90 minutes to make sure that we go through."