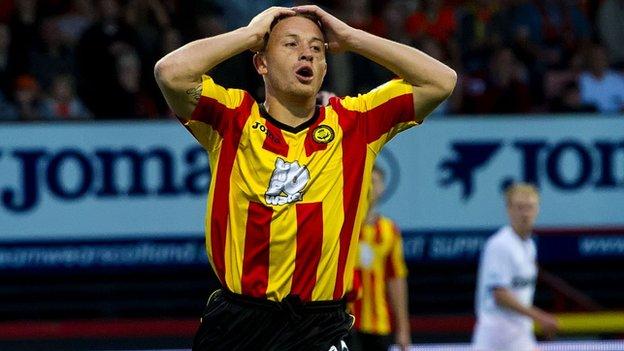 They are setting up a at Partick Thistle. Maybe they should think about a finishing school as well.

It's becoming increasingly frustrating for the Firhill faithful that the flowing football they're enjoying is more often than not minus an end product.

But let me put that in perspective before I go any further. Thistle have lost only three of their opening nine Premiership games in their first season of top flight football in nine years.

They went into the October international break with 10 points on the board. That's 17 better off than Hearts, seven ahead of Kilmarnock and five in front of St Mirren.

For a newly-promoted team with a modest budget that's got to go down as a great start.

The maddening thing, though, for , his players and the supporters, is that their points total could and should be considerably better at this stage.

I've done radio commentary on three of their home games and I've only had to describe one Thistle goal, which was a penalty.

They've had a total of five Firhill matches in the Premiership up till now and have still to score from open play.

That's crazy because the football they play is top quality. The last match I saw probably sums up their lack of cutting edge.

The Jags had two great chances to score at home to Hibs. Once, when Kris Doolan was right through on goal, and later, after they'd gone a goal down, when an inviting cross dropped in front of substitute Christie Elliot six yards out.

Both efforts were saved by Ben Williams when the Hibs keeper shouldn't have stood a chance of stopping either.

Doolan also put a header over the crossbar, from a pinpoint Stephen O'Donnell cross, when you would expect him to be at least hitting the target. with a classic sucker punch.

I'm not having a go at Doolan - he scored from a tight angle in Perth the game before. It's a collective problem.

Maybe they don't get enough players in the box to support their main striker because you certainly can't accuse Thistle of failing to create chances.

Their two full-backs, O'Donnell and Aaron Taylor Sinclair, are constantly delivering the ball from out wide and there's no shortage of attacking ideas from the likes of Kallum Higginbotham and Steven Lawless.

But their failure to get the ball in the net often enough, based on the number of chances they carve out, has become a recurring theme.

It's not a massive problem at the moment. They have a solid-looking defence which hasn't conceded many goals. But that back four could come under increasing pressure as the season goes on if goals aren't going in at the other end.

The future looks bright for Thistle with a big investment being made in youth development at the club.

What's also being targeted is a prolonged stay in the top league. Survival this season is paramount. I don't see Thistle going straight back down - even via the play-offs - but they'll need to start finding the net with a bit more regularity.