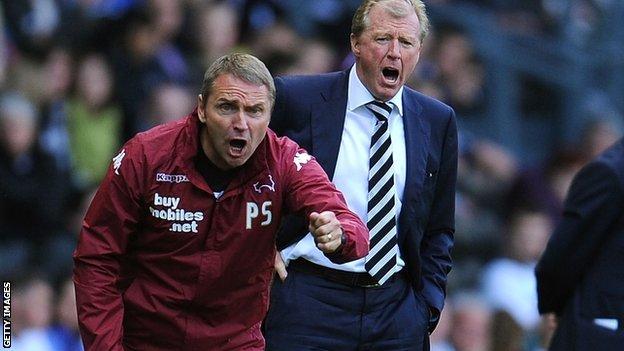 Derby County first-team coach Paul Simpson believes the international break has provided an ideal opportunity for the new management team to bed in.

The 47-year-old told BBC Radio Derby: "The manager got some basic points across before the game against Leeds.

"But it's now a case of the players getting used to him, myself and Eric Steele [goalkeeping coach]."

Clough was sacked after a 1-0 defeat by rivals Nottingham Forest, with the Rams 14th in the Championship table.

Derby were 3-1 home winners over Leeds United last weekend in McClaren's first game in charge, but now do not play again until visiting Watford a week on 19 October.

Simpson said: "It's definitely a working fortnight, not a rest fortnight. They will get the odd day at home with their families where they can recover, but it's not a holiday.

"We want to give them a shape to work from and put things into their minds.

He added: "We know that we are not going to go into every game and it's all rosy in the garden; we know we are going to come unstuck at times.

"But when those days come we want to have a base to work from."

Simpson is hopeful midfielder Will Hughes will be available to face Watford after a groin injury forced him to pull out of the England Under-21 squad to play San Marino and Lithuania.