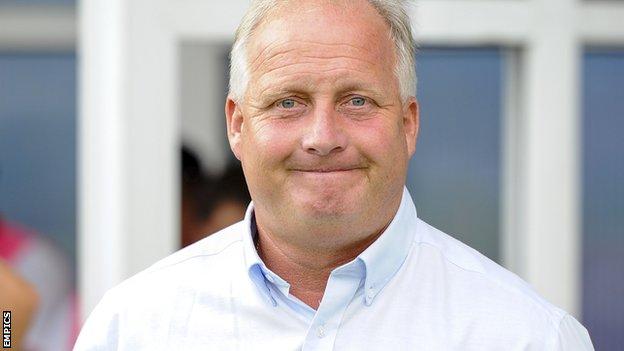 Bury manager Kevin Blackwell has told of his frustration at the restrictions that are hindering his bid to add more players to his squad on loan.

Under Football League rules, clubs are only allowed to include five on-loan players in their matchday squad of 18.

They already have five players at the club on a temporary basis.

"How can a club do its business in two windows?" said Blackwell. "Right now, we need to be able to move players in and out. It's a problem for me."

He continued: "Ideally, we could have done with a bit of business and we can't."

Should Blackwell - who following months of financial problems - choose to make another loan addition and want to play him in a competitive fixture, he would be forced to omit one of Shaun Beeley, Danny Mayor, Jordan Sinnott, Jordan Mustoe and Anton Forrester from the team that has featured for the Shakers in recent weeks.

Bury are able to sign free agents and Blackwell has confirmed former Scotland striker Garry O'Connor is currently training at Gigg Lane, although he is around six weeks away from full fitness.

The former Leeds and Sheffield United boss told BBC Radio Manchester: "We know where we are and we know what we need. I know how close we are.

"We're two or maybe three players away from being a team that could quite easily go on a 10 or 12-game unbeaten run."

Bury have not won since a 4-1 home success against Cheltenham on 31 August. Their three defeats in that time - against Rochdale, Fleetwood and Dagenham - have all been by a single goal.

"We're in all of these games and the frustration for me is that, as close as we've been, we've not won games," added Blackwell.

"We've played some outstanding stuff this year and we're getting praise from all around the place. I'd rather have less praise and more wins."

"Football has never been a sprint. It's always been a marathon. It's not over a few weeks. It's over a season.