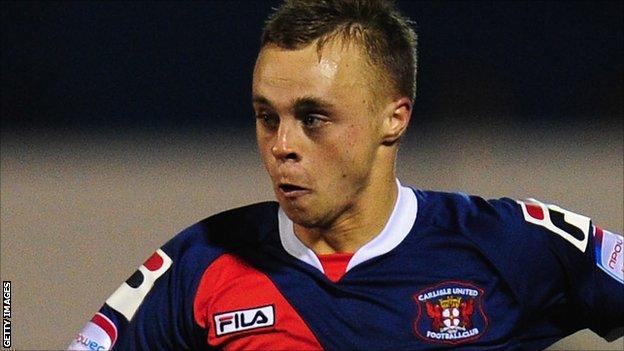 Carlisle United boss Graham Kavanagh has said Chris Chantler's recovery from an ankle injury is improving but has not put a timeframe on a return.

Chantler, 22, has been out of action since January's 1-0 win against Coventry after undergoing surgery.

He had made 44 appearances for the club following an initial loan move from Manchester City in November 2011.

We've got a physical day on Friday, and then I'll give the players the weekend off, I think they have deserved it

He added: "With each training session he gains in confidence - it's now about him getting a good whack on it and a strike of the ball in the first-team environment."

Ex-City midfielder Chantler made one appearance for his hometown club, against Juventus in the Europa League in December 2010.

Meanwhile, Kavanagh and his players have a free weekend after their League One game with Wolves this weekend was postponed due to their opponents' international call-ups.

The break gives the Cumbrians a chance to take stock after an unbeaten five-game run following Kavanagh's appointment as successor to Greg Abbott.

Three wins and two draws have lifted them to 13th in the table, and into the area quarter-finals of the Johnstone's Paint Trophy.

"We've got a physical day on Friday, and then I'll give the players the weekend off, I think they have deserved it," the former Republic of Ireland midfielder said.

"They've worked extremely hard, long hours and putting everything into place so they deserve a couple of days.

"Next week we'll have our normal preparation, and definitely be ready for the Oldham game."