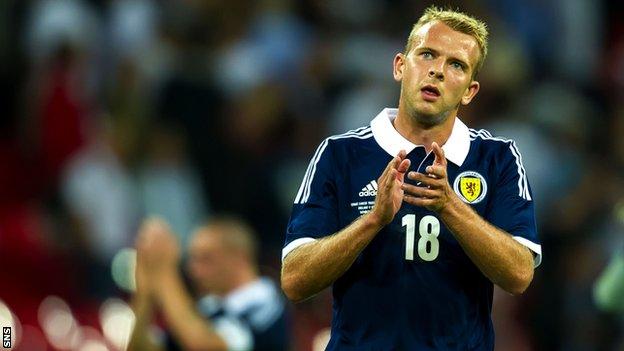 Striker Jordan Rhodes has withdrawn from the Scotland squad for next week's match with Croatia.

The 23-year-old, who has scored nine goals for Blackburn this season, misses the final World Cup qualifier due to a groin injury.

Rhodes has scored three goals in 11 international games but has only started once under manager Gordon Strachan.

No replacement has been called up for Tuesday's meeting at Hampden.

Rhodes also missed Scotland's last match, the 2-1 victory over Macedonia in Skopje last month, after being sent home with a hand injury sustained in training.

Strachan had previously suggested that the forward was unsuited to a lone striker role.

However, when naming his squad, the manager hinted heavily at a starting role for Rhodes against Croatia.

"The manager feels a little bit frustrated that he's not been able to give Jordan a real opportunity.

"Jordan might have got that chance this time around and now he's out."

Strachan used Wolves' Leigh Griffiths then Everton's Steven Naismith to lead the attack in the World Cup qualifiers against Belgium and Macedonia in September, while George Boyd and Ross McCormack are the other listed forwards in the squad.

Shaun Maloney and Steven Fletcher were already missing through injury and Steven Whittaker is suspended.

Robert Snodgrass, who scored when Scotland beat Croatia away in June, has yet to join the squad since his wife is expecting a baby but Ikechi Anya, who was a doubt with a thigh injury, has been training.