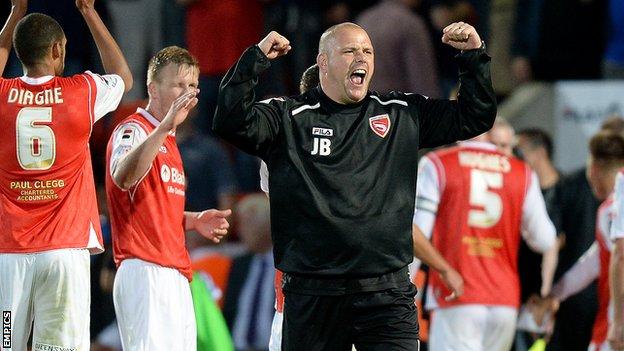 Morecambe manager Jim Bentley has signed a new deal that will keep him at the club until the summer of 2016.

The 37-year-old is in his third season in charge of the Shrimps, having

Morecambe have made an excellent start to the campaign and lie sixth in League Two after seven games unbeaten.

"I have enjoyed my last two years in management and I feel we are progressing both on and off the pitch," Bentley told the club website.

His assistant, Ken McKenna, has agreed similar terms to remain in his position at the Globe Arena.

Defender Jim Bentley joined Morecambe from Telford in 2002 and made more than 300 appearances for the Shrimps, captaining them at Wembley as they won promotion to the Football League for the first time in 2007.

Since being appointed as Morecambe's manager in May 2011, Bentley has taken charge of 116 matches, winning 39, drawing 33 and losing 44.

He is joint-13th in the list of longest-serving managers in the top four divisions in England, alongside Port Vale's Micky Adams.

Bentley spent nine years as a player at Morecambe, helping the club win promotion to the Football League in 2007.

He also had a year as player-boss, although he did not play a game in the 2011-12 season, before deciding to concentrate solely on his managerial duties.

Bentley has led Morecambe to final positions of 15th and 16th in the fourth tier, fighting against to keep the Lancashire club in the Football League.

He continued: "I have been at Morecambe for more than 10 years and it is a place that is close to my heart.

"Kenny and myself are working really hard and no one could be more determined to make this a success than the pair of us.

"Between us, we are working hard on doing the right things in relation to players, developing a training ground and developing a youth system."

The Liverpool-born former centre-back added: "It doesn't just happen overnight at a club like ours so we have to go about things the right way and everyone at this club is determined to see us develop even further over the next few years.

"We are already seeing the positive changes and the rewards of everyone's hard work and we are determined to make sure that continues over the next few years."