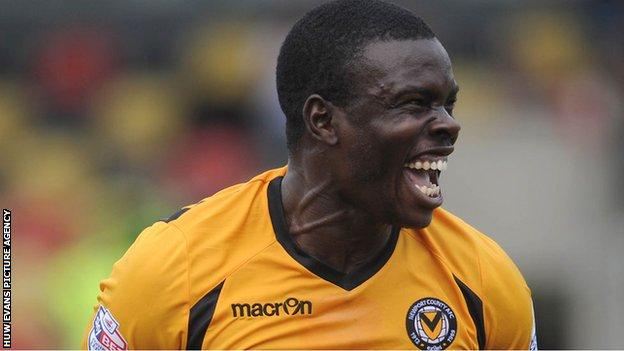 Newport County are hopeful of having Ismail Yakubu available for Saturday's League Two trip to Rochdale.

It was originally feared the defender had strained a hamstring during the 3-2 win over Crawley Town in the second round of the Johnstone's Paint Trophy.

However, manager Justin Edinburgh says the news is better than the club had hoped.

"It seems like its stemming from his back rather than a strain or a muscle injury," Edinburgh said.

"It looks like we're going to have a bit of luck for once.

"We got him off at the right time and he trained with the group this morning, and we're hoping he has no reaction to that and that he'll be fit and able to take part in the game this Saturday."

However, the Exiles still have long-term injury concerns over a number of players including Aaron O'Connor, Christian Jolley, Max Porter, Byron Anthony and Andy Sandell.

O'Connor, last season's top scorer, has not played this term because of a groin injury and will see a specialist next week.

"We're going to take him to see another specialist on Tuesday just for a little bit of peace of mind," said Edinburgh.

"I think it's only fair on the player to get a second opinion and Adam Roach, the new physio, is going to take him to a specialist in London to try and clear one or two matters up for the player really, so that we can continue his rehabilitation.

"I'm not going to keep putting time limits on people because I think that can affect people mentally.

"We want him back as quickly as possible and we're seeing progress and that's the main thing."