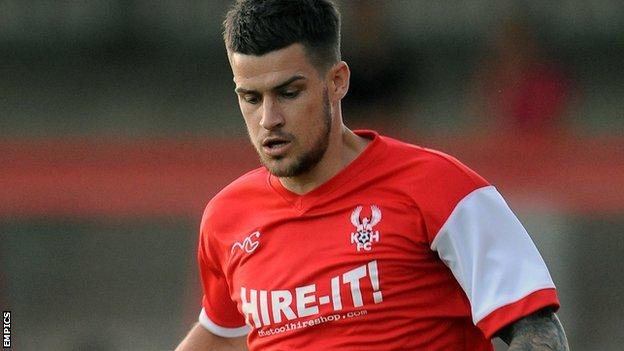 Kidderminster Harriers have failed in an appeal to have James Dance's red card in Tuesday night's 4-1 home win against Forest Green Rovers overturned.

Dance and Rovers midfielder Aarran Racine were both sent off by Devon referee Kevin Johnson following an injury-time flare-up sparked by the Harriers winger's initial challenge.

Harriers lodged the appeal after studying video footage of the incident.

But the sending off was upheld by the Football Association on Thursday.

Dance, 26, who the club say had his hair pulled by Racine, had never previously been sent off in five seasons of Conference football with Kettering, Crawley, Luton, Nuneaton and Kidderminster.

But he will now have to serve the automatic three-match ban that comes with a straight red card for violent conduct.

While the injury-hit Harriers can ill afford the loss of Dance for Saturday's trip to Southport, they are hopeful that first-half injury casualty Callum Gittings will not be out for long.

"I don't think it is too serious with Callum," said assistant manager Gary Whild. "It was a precaution to take him off.

"It is more a case that it is tight, rather than having stretched it."