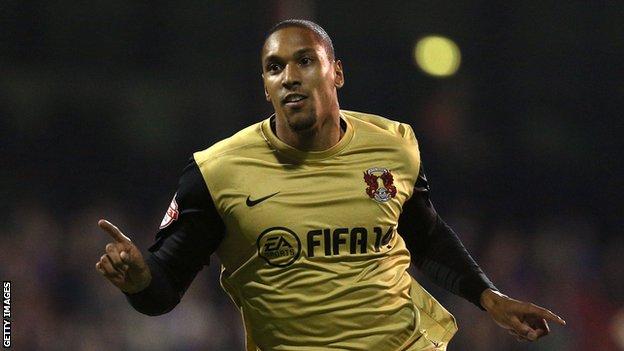 Leyton Orient striker Shaun Batt accepts he may have to be patient as he looks for a regular starting place.

The 26-year-old has scored six goals already this season, but has largely been used from the bench.

He told BBC London 94.9: "I'm desperate to be starting games rather than coming on. [But] David Mooney and Kevin Lisbie have been in frightening form.

"I have to sit and wait for my chance. It's lucky I have been able to come on and have an impact in games."

He continued: "As a footballer you have to realise it is a team game. It is not based around any one player."

Batt joined the O's on a two-year deal this summer following a successful loan spell at Brisbane Road last season.

However, with Mooney and Lisbie having scored nine and eight goals respectively, former Millwall man Batt has made the majority of his appearances as a substitute.

He has started three games this season - one in League One and two in the Johnstone's Paint Trophy - but has come off the bench eight times in the league, scoring three goals.

"I've had a couple of starts in the JPT and have been looking to prove a point and get myself a starting position," said Batt.

"The Gillingham game I scored a hat-trick, but I wasn't expecting to play the following game as the lads had won six out of six and both the strikers were scoring.

"No-one deserves to be dropped at the minute. Even though I am coming on and scoring I still have to be patient. Hopefully the starts will come further down the line."

Orient manager Russell Slade has praised Batt for his impact from the bench, but the former Peterborough trainee says he must always remain focused in case he is needed from the start.

I want to make as big an impact as possible. I have signed here for two years and am hoping to re-ignite my career after a few injury problems

"We have got a small squad and there will be injuries and suspensions. It is part and parcel of the game," said Batt.

"I am doing everything I can in training to make sure I am in the best condition possible. Hopefully when I am needed I will be there and ready for action.

"I want to make as big an impact as possible. I have signed here for two years and am hoping to re-ignite my career after a few injury problems."

Orient are currently top of League One and, with eight wins and two draws from their opening 10 matches, have made their best-ever start to a season.

"Confidence is really high within the team," he added.

"We have had a great run and I think we have surprised a lot of people with how well we have started.

"I suppose stability has been the main key and we have been able to build on that.

"We've got ourselves in a good position early on and we are looking to continue it and see where we end up at the end of the season."