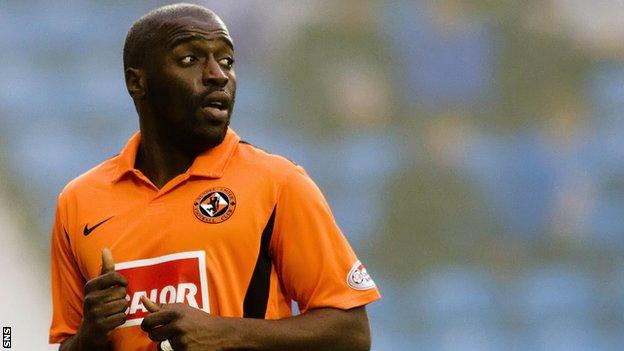 Midfielder Morgaro Gomis has returned for a second spell at Dundee United on a deal until the end of the season.

France-born Gomis, 27, left Birmingham City in the summer after signing for the Midlands club from United in 2011.

During his previous spell on Tayside he played 180 games, scoring seven goals and was a member of the Scottish Cup-winning team in 2010.

"The opportunity to get back playing at Dundee United makes me very happy," said Gomis.

A product of the Chelsea youth system, Gomis made his full international debut for Senegal in March 2009 while playing for United.

Formerly with Montpellier, he had brief stays at several English non-league clubs before moving to Scotland with Cowdenbeath.

He has been training with United since September and has impressed manager Jackie McNamara with his approach.

"I know United fans will have great affection for Morgaro for what he achieved here previously but I have decided to offer him a contract based on what he has shown me over the last five weeks in training," said McNamara.

"His attitude, application and professionalism has been first class and added to the fact that he has excellent ability makes signing him an easy decision.

"Having him as part of the squad will allow me to select alternative tactics and formations at certain grounds and he brings great experience to the squad.

"This signing is very much about making the squad stronger and the length of deal will allow Morgaro and the club to see how the partnership can develop going forward."

Gomis first moved to Tanandice in 2007, having done well in his four months at Cowdenbeath.

"After initially being offered the chance to keep my fitness level up, I have been impressed by the quality within the squad and have been welcomed by everyone," he explained.

"I have great memories of Tannadice but I want to help create more good times for the club."