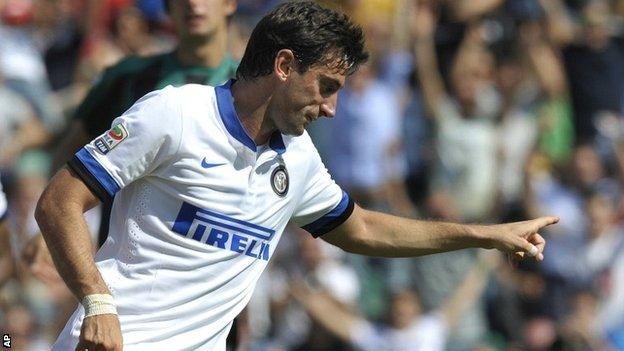 Argentine striker Diego Milito has rejoined Inter Milan's injury list after a scan on Thursday revealed a muscle strain in his left thigh.

Milito returned to action for Inter in September after seven months out with a cruciate knee injury, but limped out of training on Wednesday.

The new injury is on the same leg as his knee problem, suffered in February.

Inter did not say when Milito, 34, would return to coach Walter Mazzarri's squad but said his recovery had begun.

"Diego Milito underwent scans at the Columbus Clinic this morning, which showed a thigh strain in his left leg. The striker has already begun his recovery programme," read a club statement.

Milito came off the bench to score twice in a 7-0 away rout at Serie A new boys Sassuolo last month.