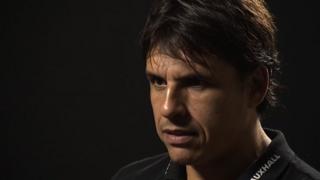 No change on Wales contract - Coleman

Wales manager Chris Coleman says that nothing has changed regarding a new contract and that his future will be decided after the final two games of the current World Cup qualifying campaign.

He also pays tribute to striker Craig Bellamy, who retires from international football after Friday's home game against Macedonia and a trip to Belgium next week.

Coleman hopes to avoid finishing bottom of Group A but FA Wales chief Jonathan Ford has said that a new deal for the Wales manager will not depend solely on these two games.

Europa League: Rangers 1-0 Benfica - can Gerrard's side earn another win?