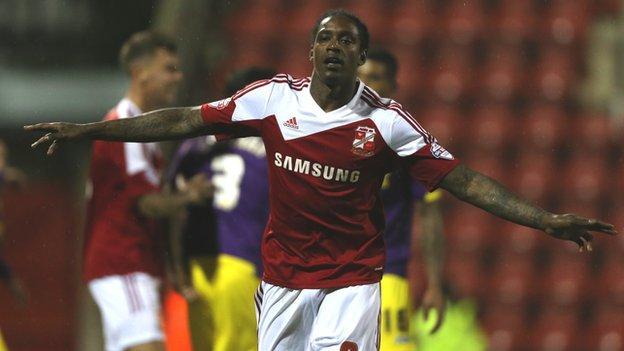 Nile Ranger put the Robins ahead on 11 minutes, firing Alex Pritchard's cross high into the net from close range.

Mustapha Dumbuya then brought down Nathan Byrne in the box to allow Dany N'Guessan the chance to slot home a 28th-minute penalty.

Ranger's strike was his fourth goal of the season - but his first in a month.

N'Guessan is now the Robins' sole top scorer with five for the campaign.

Notts striker Danny Haynes thought he had reduced the deficit 13 minutes before half time when his effort was ruled out for offside.

Haynes then blazed a late penalty over the bar following Yaser Kasim's foul on Callum McGregor.

But Swindon had gone even closer to a third goal early in the second half when Byrne fired against a post after following up Pritchard's free-kick.

"Two-nil is a horrible scoreline. It was very, very risky.

"If they score it becomes an interesting game and I just felt that we had so many chances to kill the game.

"It made us have a nervous spell in the second half.

"But we played very well again. Football-wise, we were controlled and passed the ball very well, and with a purpose."