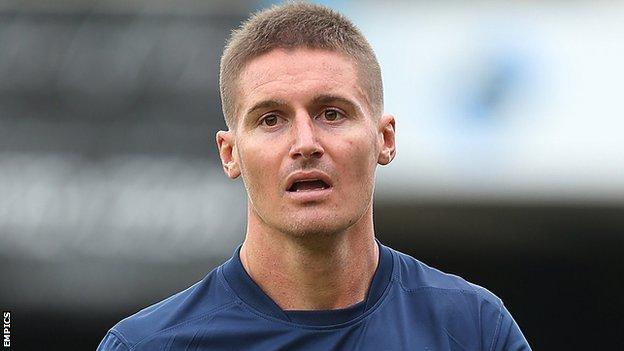 Southend United striker Barry Corr hit his first goals since the first day of the season to wreck Fleetwood's hopes of returning to the top of League Two.

Corr headed the Shrimpers in front on 21 minutes from Kevan Hurst's cross.

The home side then sealed the points with an 81st-minute penalty.

Stewart Murdoch was adjudged to have fouled Will Atkinson and Corr powered his spot-kick into the top-left corner to confirm the hosts' third straight league win.

Fleetwood had been on top up until the Shrimpers' first goal, striker David Bell having had two low shots saved by Southend keeper Daniel Bentley, who also did well to parry a well-struck shot from Antoni Sarcevic.

The Cod Army, who gave new loan defender Charlie Taylor his debut, remain second in League Two, a point behind leaders Chesterfield, while Phil Brown's Southend move up to sixth.

"I think it was deserved. It was a good, feisty encounter but at the end of the day it was about the battling qualities of both teams and I thought we came out on top in terms of the battle.

"Barry Corr got man of the match, that was probably because of the two goals he's got. He's been in there 12 games without a goal.

"He had to keep believing and he did, and he got his just rewards."

"It wasn't our usual high standard but a few decisions at key times went against us.

"We had chances to score and some of our final balls weren't up to standard.

"We invited some of the pressure on ourselves - we had the chance to play it forward but went back and back and put Scott Davies under pressure needlessly."