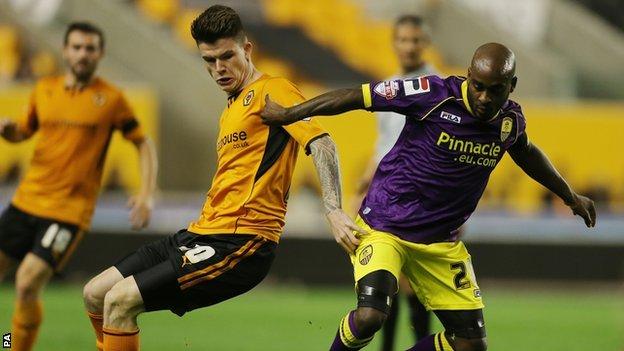 Shrewsbury Town have made their second signing of a loan striker inside 24 hours by bringing in Wolves youngster Liam McAlinden.

The Cannock-born former Northern Ireland youth international has arrived on a three-month loan.

"I was first told at the start of the season that Shrewsbury were interested in me," he told BBC Radio Shropshire.

"It's finally happened, Now I have to make the most of it and I'm hoping to impress and score some goals."

McAlinden, 20, goes straight into the Town squad for Saturday's League One home game with Gillingham.

His arrival follows that of Spaniard Cristian Lopez, who signed on a month's loan on Thursday from Huddersfield Town.

The two loan strikers will contest a place up front with Town top scorer Tom Bradshaw, who has put club before country by pulling out of Wales Under-21 duty to make himself available.

McAlinden himself also made headlines on the Under-21 front this summer.

Having represented Northern Ireland at youth levels, he was called up by their Under-21 squad, only to switch his allegiance to the Republic of Ireland, for whom he qualifies through his parents.

After being handed his debut by former Wolves boss Dean Saunders against Burnley at Molineux in April, on the day when a 2-1 defeat all but confirmed the club's relegation to League One, McAlinden has now made three appearances.

He scored his first senior goal in last month's Johnstone's Paint Trophy first round win over Walsall on penalties - and was on the bench when Wolves won 1-0 at the Meadow last month.