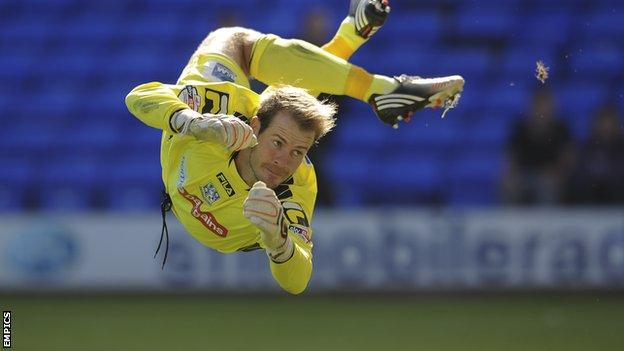 Owain Fon Williams will be released from Wales duty to play for Tranmere at Bradford on Sunday, easing the League One club's goalkeeping crisis.

The 26-year-old is part of for their World Cup qualifiers against Macedonia on Friday and Belgium four days later.

"He [Coleman] is willing to let him come for the Bradford game, which I thank him for," said boss Ronnie Moore.

He told BBC Radio Merseyside: "We would have been in massive trouble if he wasn't [able to play].

"They don't fly to Belgium until Monday so we've been very fortunate, otherwise we would have had to bring an experienced keeper in to come and play for one game. It's saved me having to go cap in hand to the chairman."

Tranmere have brought in Aston Villa's Bradley Watkins, 19, on a one-month loan deal as cover for Fon Williams, who is yet to win a senior cap for his country and is unlikely to start for Wales - who can not qualify for next year's World Cup in Brazil -

After playing for Tranmere on Sunday, he will link up with the Welsh squad again ahead of their final Group A match against Belgium in Brussels on Tuesday.

Mooney is currently sidelined with a knee injury, while teenager Ramsbottom broke his ankle in training earlier this week.

"It's a shame for young Sam," added Moore, 60. "Jason is going to be out for four to six weeks and Sam was looking forward to being on the bench and being involved.

"Unfortunately he's had an accident in training he's put too much weight on his ankle, gone the wrong way and ended up breaking his ankle. He's going to be out for three months."

Rovers are with one win from 10 league games.