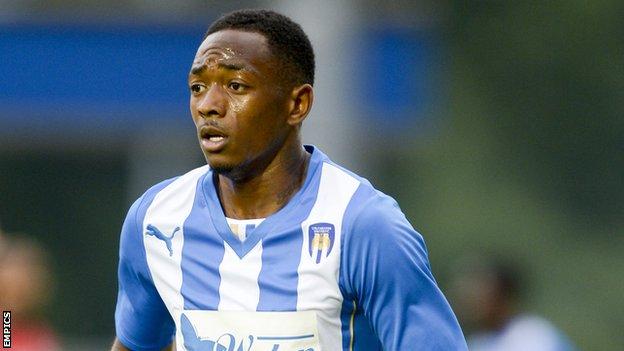 Sanchez Watt's injury saga has continued with the Colchester United winger expected to be out for six weeks with a quad problem.

The 22-year-old missed the majority of last season with a torn hamstring and had suffered a thigh strain in August this year.

Meanwhile, Luke Garbutt has extended his loan from Everton by a month.

How many for Watt?

The 20-year-old defender has featured four times since joining from the Toffees.

The U's are also hopeful of extending the loan spell of midfielder Jeffrey Monakana from Preston.

Watt's setback last season brought an end to his loan spell from Arsenal, but he rejoined the U's on a free transfer in the summer.

He has played five times this term but has not featured since the end of August.

"It's one thing after another with Sanchez and it's desperately disappointing for the lad. So he's out for six weeks," added Dunne.

"I think he's missed nearly 50 days since he signed."

The U's have suffered a string of injuries this season, with Tosin Olufemi and Gavin Massey set to return from spells out but Drey Wright now sidelined for six weeks after knee surgery.

"We're trying to find out where these things are coming from. We have an idea. It's not necessarily down to the training," said Dunne.

"What we've seen is a lot of overtraining, a lot of slipping, a lot of people falling over. It could be many things. We have our ideas."