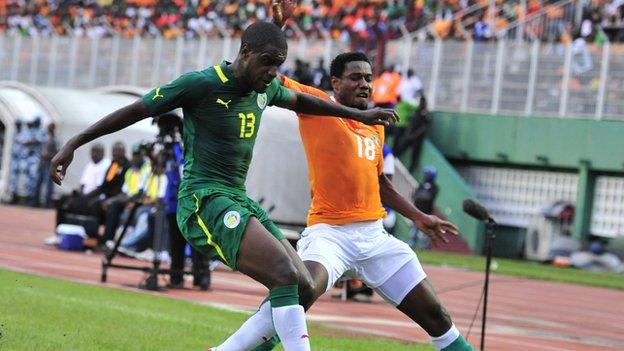 The final round of African qualifying for the World Cup begins this weekend, with Ivory Coast taking on Senegal and Burkina Faso up against Algeria.

Saturday's matches are the first of five two-legged ties involving the 10 group winners from the previous round of qualifying, with the return legs taking place in November.

The five aggregate winners will book their place at next year's tournament in Brazil.

Ivory Coast host Senegal in Abidjan for what will be the first meeting between the sides since their Africa Cup of Nations qualifier in Dakar in October 2012 was abandoned because of rioting fans.

Elephants midfielder Yaya Toure told BBC Sport he is confident there will be no trouble this time and said the team were focused on doing their job.

"It is always tough when we play in Africa, but we have to do our best to qualify because it is very important for our country and for us," the Manchester City player said.

Toure is joined in the Ivory Coast squad by his older brother, Kolo, who has not played for the Elephants since March.

Veteran striker Didier Drogba is expected to lead the forward line, but fellow forward Didier Ya Konan is unavailable after undergoing ankle surgery.

Senegal have recalled striker Papiss Cisse after he completed a one-match suspension but Chelsea forward Demba Ba has been left out.

Coach Alain Giresse has maintained his policy of selecting only players who are getting regular first-team football, and that has ruled out Ba, who is struggling to get into the team at Chelsea.

However, Senegal captain Mohamed Diame, who plays for West Ham in England, is perplexed and told BBC Sport that he believes "it is very strange" to leave Ba out.

"When you have a big player, a big talent like Demba Ba who shows his talent, his goals and assists in the English Premier League, of course you want to have him in your team," Diame said.

"But the gaffer has not picked him and we have to respect that. Demba is very disappointed, but this is football."

The Teranga Lions are also without Hanover striker Mame Birame Diouf, who is injured, so the pressure is on Cisse to provide a threat up front.

An away goal would be precious for Senegal for the return leg, particularly given the one-year ban on them playing in the national stadium - punishment for the riots in Dakar - remains in place and they will host Ivory Coast in Casablanca, Morocco on 16 November.

One hour before Saturday's game in Abidjan, the play-offs will begin in Ouagadougou, where Burkina Faso kick off against Algeria.

Burkina Faso seek to crown a year beyond their wildest expectations with a good home result against the Desert Foxes.

After finishing as surprise runners-up at the Africa Cup of Nations in February, Burkina Faso staged a miraculous comeback in the World Cup qualifiers after being docked points in the preliminaries for using an ineligible player.

However, they will again be without key striker Alain Traore, who is injured and has been left out of their 24-man squad.

The Burkinabe will look to Aristide Bance to spearhead their attack and the Fortuna Dusseldorf striker is confident that the time is right for his country to qualify for their first World Cup finals.

"There is a beginning to everything," Bance told BBC Sport. "We had to build a strong personality on the African continent and we did that when we came second in the last Africa Cup or Nations.

"Now we have a chance to play at the World Cup, and the time has come for us to make it happen."

Algeria have made several changes to their squad, among them is a call-up for striker Mohamed Amine Aoudia.

He replaces French-born Inter Milan forward Ishak Belfodil, who has been dropped after only two caps since he confirmed his national allegiance.

Aoudia's goals for his club Dynamo Dresden have led to his first call-up since the Africa Cup of Nations.

French-based pair of Faouzi Ghoulam and Foued Kadir have also been recalled, having been dropped for last month's World Cup qualifier against Mali.