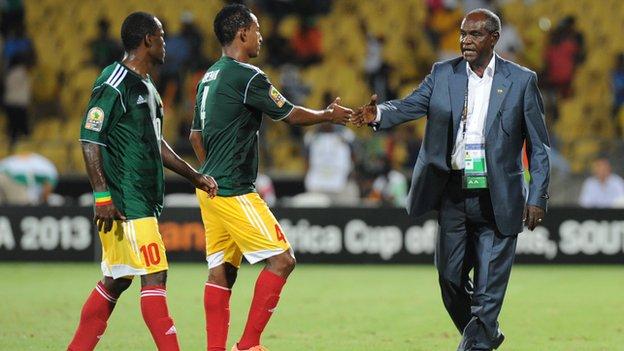 The Super Eagles are overwhelming favourites to make a strong start to the two-legged tie and earn an advantage to take forward to the return match in November.

Nigeria played at the previous World Cup in 2010, while Ethiopia are hoping to make it through the play-offs to reach Brazil and make their first appearance at a finals.

Ethiopia appear to have a daunting task against a Nigeria side full of big name players like John Mikel Obi, Victor Moses and Emmanuel Emenike.

But Walya Antelopes coach Sewnet Bishaw is optimistic his side can pull off a shock.

He told BBC Sport: "Nigeria are very experienced and have a lot of talent and skill. But even though they have those qualities, we are at a good level and we will challenge them.

"Our players are young, fresh and have played against many professional players - they have come to understand that it is man against man, and that they can beat any country if they work hard."

However, Bishaw has been dealt a blow with the absence through injury of key striker Getaneh Kebede Gibeto, who Ethiopia's joint top scorer in the group stages.

For Nigeria coach Stephen Keshi, he knows his country expects qualification. But despite the pressure that brings, Keshi remains calm and has called for his players to do the same.

"We just have to keep calm, no matter how they are going to provoke us we have to concentrate. My players' expressions on their faces will tell you how high their spirits are for this game. We will see what happens on Sunday."

Keshi has also been boosted by striker Shola Ameobi's assurances he will be fit to play.

In Sunday's other tie, Tunisia - in the play-offs because Cape Verde were stripped of a 2-0 win and disqualified for fielding an ineligible player in the sides' final group match - will want to make the most of home advantage against Cameroon.

Tunisia will coached for the first time by Ruud Krol, who replaced Nabil Maaloul when he resigned after Tunisia's match against Cape Verde on 7 September, before the result was overturned.

Krol has brought in attacking midfielder Maher Hannachi and striker Fakhreddine Ben Youssef, while key striker Saber Khalifa is back after suspension.

Tunisia midfielder Wissem Ben Yahia told BBC Sport: "I think we have to be mentally strong, the players have to have a good communication between them and the technical staff.

"This is the coach's first match with us but I think the players' role is more important because this match is decisive for us. We have 180 minutes, the first half in Tunis and then the second in Cameroon. We are ready and I hope we will be up for it on Sunday in Rades."

Cameroon have been boosted by the return of Samuel Eto'o, who threatened to retire but was then persuaded to return by the country's president.

But Benoit Assou-Ekotto, on loan at Queens Park Rangers from Tottenham, has been left out.

Cameroon were a far from convincing group winner and with Tunisia desperate to make the most of their second chance, the tie looks a difficult one to call.