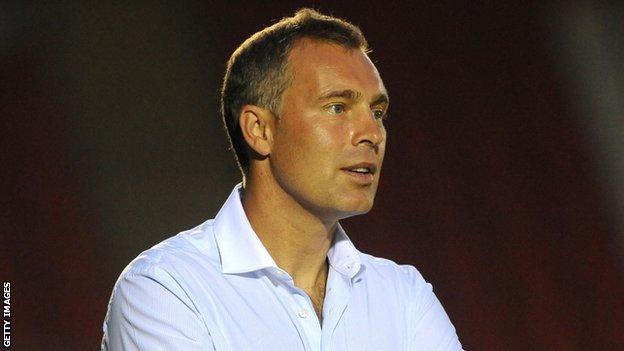 Dagenham & Redbridge manager Wayne Burnett says his side have improved dramatically this season.

The Daggers, who avoided the drop on the final day of last season, are one point outside the play-off places.

"We've started reasonably well. Results-wise we have done okay but the performances have not always been what I expected," he told BBC London 94.9.

After taking charge of Dagenham permanently in the summer, Wayne Burnett laid down a challenge to skipper Abu Ogogo to score more goals - after the midfielder found the net just once in 49 appearances last season.

"I had a bit of a joke and bet with Abz that he wouldn't score more goals than Luke.

"He's got five and Luke's got two.

"What I intend to do, if he starts scoring too many, is put him back to full-back.

"He has done fantastically well and he leads by example and drives the group."

"Considering where we were at the back end of last season to where we are now, we have come quite a long way."

He continued: "We are a work in progress but I like to think we are slowly getting there."

The east London side have only lost twice in League Two this season and are currently on a seven-match unbeaten run in all competitions.

"Winning football matches creates confidence and belief within the group," he said. "Results are massive when you are trying to instil something in a group of players and individuals.

"It hasn't been easy and we have had a lot of ups and downs.

"We have had some good results but I am very mindful how quickly it can change."

Burnett took charge of Dagenham on an interim basis at the end of February following the departure of John Still to non-League Luton Town. And, after keeping the Victoria Road outfit in the Football League, Burnett signed a two-year deal this summer.

"I certainly think there has been progress but the foundations and fundamentals were set down by John," Burnett said.

"Without him this club wouldn't be where it is today. He has created the structure for this club to go forward.

"He set a blueprint out that will be here forever while the club is in the Football League.

"What I learnt from him was immense and I am forever full of gratitude towards him.

"He created a fantastic character at this club; a never-say-die attitude, a willingness and a hunger and that still remains here."