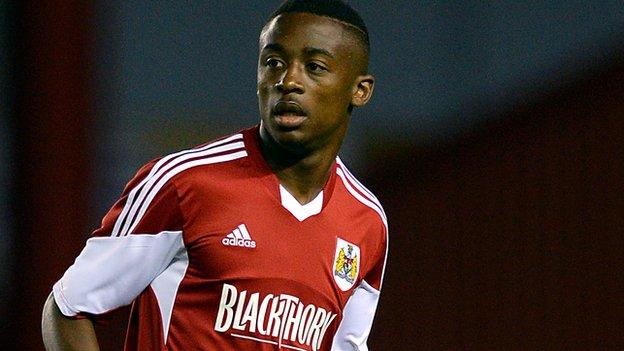 Hereford United have brought in two new strikers on loan in a bid to arrest their slide towards the lower end of the Conference Premier table.

Both are available to make their debut at home against Dartford on Saturday.

Tuesday's 1-0 loss at Macclesfield saw the Bulls slip to 16th following a run of just one win in eight matches.

They also lost striker Sam Smith, who has been suspended for three matches after being sent off for an alleged elbow late on at Moss Rose. And Bulls boss Martin Foyle also has a host of injuries to contend with.

Krans caught Foyle's eye when he scored the only goal for the Robins against Hereford in a behind-closed-doors friendly last month.

After signing an 18-month contract extension with City in February, he is now part of their Under-21 squad and has come to Edgar Street on a youth loan.

Dyer was signed by Mansfield from Forest Green Rovers in August 2011, thanks to the contributions of Stags fans, and rewarded them by hitting nine goals in his first season as they made the Blue Square Premier play-offs.

But he then got injured on the first day of the following season, when he was taken off on a stretcher just half an hour into the Stags' opening game, missing out on their promotion back to the Football League.

Although now fully fit, he has been kept sidelined by the Stags' bright start to life back in League Two, and has made just one 19-minute cameo appearance off the bench and has come to Edgar Street in search of regular first-team football again.