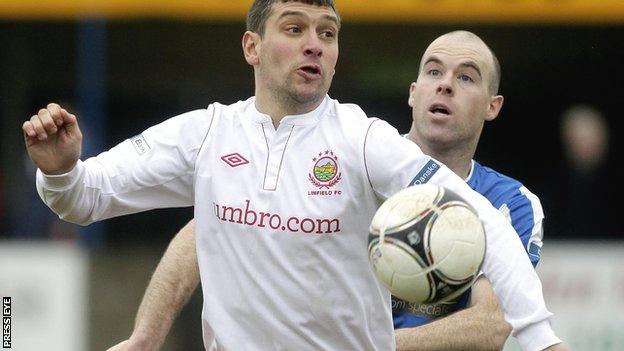 Linfield boss David Jeffrey believes the Premiership pacesetters will have to be at their best to overcome Dungannon Swifts at Windsor Park.

The Blues have won their last six league games to take over at the top while the Swifts are back in sixth.

"Anybody can beat anybody on any given day and that's what makes this league so interesting," said Jeffrey.

"Dungannon have had some notable results and coming here will hold no fears for them, so it will be tough."

Grant Cameron presents coverage of the five matches on Saturday Sportsound on Radio Ulster from 14:00 BST.

Michael Hammond and Tony Gorman will take you through the action from Ballinamallard v Cliftonville.

Michael Clarke is joined on commentary by Stephen Small for Dungannon's game against Linfield.

There's also reports from the other three league fixtures.

The Reds make the long trip to Ballinamallard on a high after an impressive 5-0 victory over Dundela in the League Cup on Tuesday night.

"You have to be on the money this year as any team can beat you," said Solitide manager Tommy Breslin.

"It's a long journey to Ferney park and it will be a tough game so we need a performance similar to that against Dundela."

Ballymena host Coleraine in a derby encounter while Crusaders go up against basement boys Ards at Seaview.

"Ards have proved themselves over the last few years and we will treat them with respect," said Crues boss Stephen Baxter.

"We've been struggling against the so-called lesser teans and we have to make sure we're professional about our preparations and performance."

Glentoran will have to pick themselves up from the shoot-out defeat by Linfield in midweek when travel to face Warrenpoint Town at Stangmore Park.

Converting opportunities has let the Glens down in recent weeks, according to Glens manager Eddie Patterson.

"If we create the same number of chances our luck has got to change and we can put the ball in the net," said Patterson.

Portadown and Glenavon meet in a Mid-Ulster derby at Shamrock Park on Monday night.