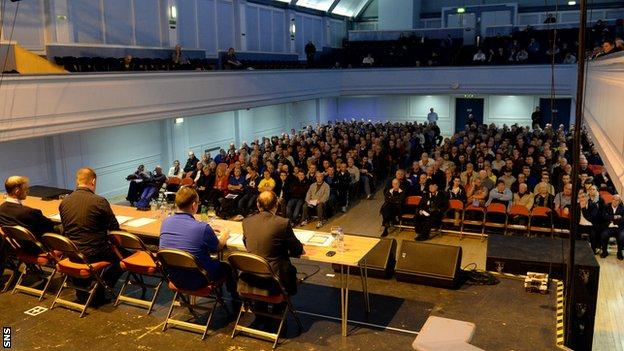 Kilmarnock have held talks with a consortium wishing to take control of the club as fans agreed separately to pursue community ownership.

The news came after Supporters Direct Scotland agreed to a request from fans groups to chair a working party on community ownership.

Johnston has been under pressure from fans unhappy at his stewardship.

And he will meet again with the consortium headed up by Alan McLeish, of the Scottish Premiership club's kit sponsor, QTS.

Also involved in the group, which has previously held talks with Johnston, are Chris McMail, from Microtech, businessman Kenny Alexander and the former Rugby Park chief executive and MSP, Ian Welsh.

A spokesman for the consortium told BBC Scotland: "It was a positive meeting and we have agreed to continue the discussions into next week."

The group is understood to be keen on greater fan involvement at Rugby Park.

Johnston, whose club has debts of more than £9m, this week announced investment of £1m from local businessman Billy Bowie.

That announcement came just before a meeting in Kilmarnock's Grand Hall, where almost 500 fans agreed to set up the working party to pursue community ownership.

The working party will feature Marie Macklin, the local businesswoman who has previously tried to buy the club, and the MP, Cathy Jamieson, and will be chaired by Supporters Direct Scotland.

Johnston, who has also had meetings with Supporters Direct Scotland, had earlier

"The gathering, on 10 October, agreed a range of measures that would be presented back to the fans, and to the club, in the near future.

"Supporters Direct Scotland also met with Michael Johnston and Billy Bowie of Kilmarnock FC on Wednesday of this week.

"At the meeting, we were asked whether there was a possibility of us pulling together a club-led working party of fans to look at community involvement.

"We highlighted the challenges involved in a club-led working party given the current concerns many fans have.

"We will now work with the fans on moving towards a more robust governance model and a pathway to community ownership and will continue to mediate with the club on these matters as required."

Browning Bakers managing director John Gall, who knows members of the interested consortium, believes that the latest moves are positive for the club.

"Change is needed, there's no doubt about that and Michael has to leave the club now," he said.

"Unfortunately, that's the only way that it can go forward.

"We know Michael's looking for a good sum of money before, so I don't know if anything changes now.

"The fans are going to come back to the game against Ross County, but it is going to be to protest."

Johnston's decision to for the Premiership game between the two sides was just the latest of his decisions to spark protests.

However, he responded by saying he will hand season-ticket holders and shareholders the chance to elect a new board member each.

Local politicians will also be invited to take part in the new company structure, while local businessman Billy Bowie has agreed to invest £1m in the club.