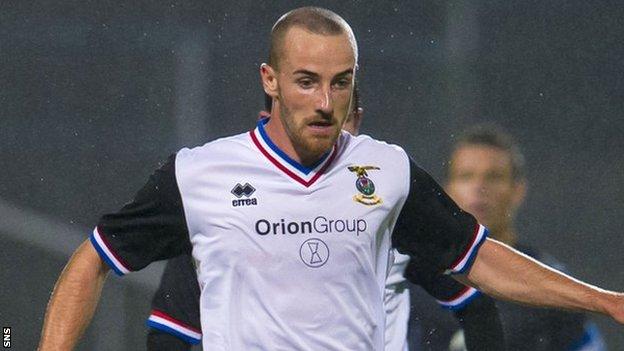 Influential Inverness Caledonian Thistle midfielder James Vincent has confirmed that he will be out of action for the club until December.

The 24-year-old was injured in his side's 3-0 defeat of Hibernian on 28 September and missed the following match - a 4-0 defeat by St Johnstone.

Englishman Vincent said on Twitter that he has a micro fracture in his tibia.

He said he is "gutted" not be be playing and believes he will "have to come back stronger and better".

Vincent scored on his Caley Thistle debut after signing in the summer after his exit from Kidderminster Harriers.

He impressed in his nine appearances as Terry Butcher's side became early surprise leaders of the Scottish Premiership.

However, in his absence, reigning champions Celtic overtook Caley Thistle after the Highland side's defeat in Perth.