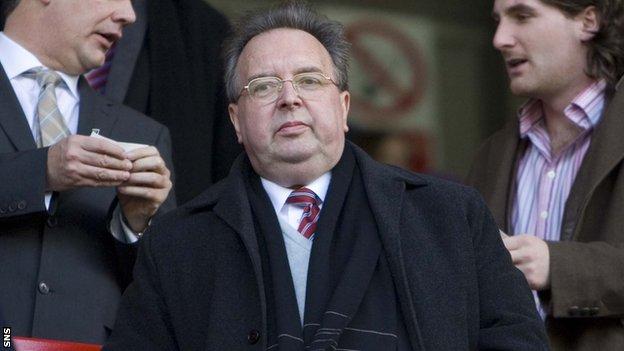 Dunfermline Athletic have won a case at the Court of Session amid warnings that the League One club could have gone into liquidation early next week.

But the victory in Edinburgh means that the Pars United community group can proceed with its purchase of the club within the next few days.

The former banker is in dispute over rights to the club's training ground.

and lodged an interdict to stop the deal ending once Pars United take control of the club.

Pars United wants to negotiate with the council over the use of Pitreavie and described it as a "deal breaker".

BDO's lawyers had told the court that the club would require a cash injection of £100,000 within two weeks to remain in business.

Pars United's Ross McArthur told BBC Scotland: "It's been a difficult couple of days. I'm just glad it's been resolved and it allows us to move with a wee bit more certainty now.

"There's obviously one or two things we've got to get sorted out over the weekend with our legal team and sit down with BDO on Monday at the latest and hopefully get this thing over the line now.

"We had certain things that had to be resolved before we took over the football club, one of which was the lease of Pitreavie.

"If that hadn't happened, there were certain liabilities we would have had to pick up that the club wasn't in a position to do that.

"I think the future looks bright now for Dunfermline.

"Pars United will hopefully in the next couple of days now acquire both the football club and the football stadium at East End Park."

, but the prospective owners recently revealed that to survive the season.

"The money is there to facilitate the debts we'll inherit, in terms of football debts, money that's put aside with some working capital," added McArthur.

"Like all football clubs. we need to raise more money during the course of the season and we intend to launch a new fund-raising scheme where members can commit to money on a monthly basis and that will hopefully raise a six-figure sum for the club, not just this year but every year."