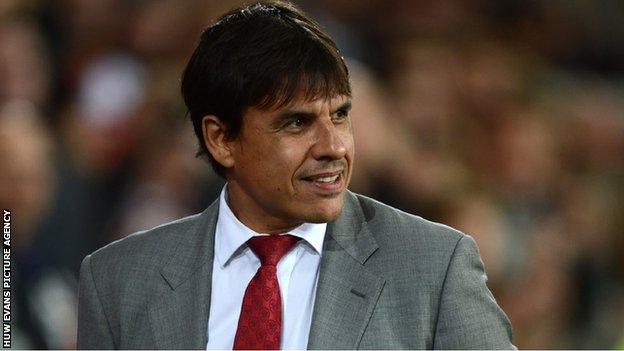 Wales manager Chris Coleman believes he would have lost his job had his side not beaten Macedonia in Friday's World Cup qualifier.

Simon Church's second half goal earned the hosts a 1-0 win in Cardiff.

The Football Association of Wales has delayed Coleman's two-year contract extension until after the Group A campaign, which concludes in Belgium on Tuesday evening.

"Had we lost this game I would have been out the door," said Coleman.

However Coleman admits his future remains open to discussions with FAW after Tuesday's game against Belgium.

Wales had 10 players unavailable for the game through injury - including Real Madrid's Gareth Bale - and Coleman said that made the win more satisfying.

"Looking at our squad of players and all the pullouts we had I am delighted," said Coleman.

"I enjoyed the win tonight more than any other because there has been a lot said and we were up against it. The players stood up to the test.

"We may have ridden our luck a bit but I thought we deserved to win."

The win was the fourth in Coleman's 14-match reign - and he has demanded the full backing of the FAW if he is to continue in the role after the match against Group A winners Belgium.

"I am not sure what anyone can do if we haven't got our best players all the time," he said. "But we have come into this camp, with a lot of withdrawals, and we have won.

"We now face a huge test on Tuesday against one of the best teams on the planet and I am not looking beyond that."

Victory over Macedonia ensured Craig Bellamy's final home game in a Wales shirt ended on a positive note and Coleman praised the performance of the forward, who has been capped 77 times.