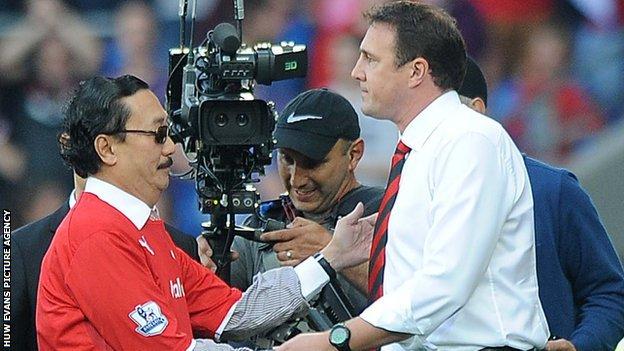 Kazakh Alisher Apsalyamov, 23, has replaced Moody in an acting capacity.

Tan said he would back Mackay to remain at the club in the long term.

"I have every faith in Malky and his team to lead us through the challenges of the Premier League. I have supported him in the past and will do so in the future for many years to come."

A Bluebirds board meeting will follow on Monday at which the issue is expected to be discussed.

In his scouting role, former Watford press officer Moody - who had been placed on gardening leave by the Welsh club - helped sign summer recruits including Gary Medel from Sevilla and Steven Caulker from Tottenham.

Apsalyamov's appointment is another controversial decision by the club's Malaysian owner.

Many Cardiff fans reacted negatively when the club's colours were changed from blue to red during the summer of 2012, while there have been reports of dressing-room unrest over bonuses.

Apsalyamov's role will be to focus "on gathering data on individual players", according to a club statement.

The statement added: "Ultimate recruitment decisions of course remain the domain of the manager and majority shareholder."

Tan said: "I would say to all Cardiff City fans and everyone connected to the club: let us look forward to the future and remain united in our support of the team."