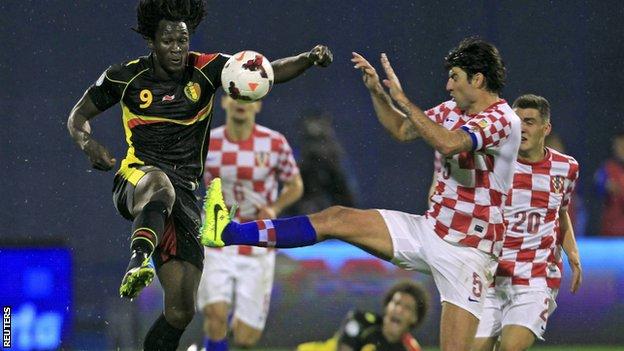 Romelu Lukaku scored twice as Belgium beat Croatia 2-1 to secure their place at the 2014 World Cup in Brazil.

Striker Lukaku, on loan at Everton from Premier League rivals Chelsea, scored twice in the first half, with Niko Kranjcar grabbing a late consolation.

Belgium were joined by Germany and Switzerland in qualifying for next year's tournament.

Germany defeated the Republic of Ireland 3-0, while Switzerland won 2-1 in Albania.

Belgium reached the finals of a World Cup for the first time since 2002 with a victory in Croatia that ensures they cannot be caught at the top of the table.

Lukaku outpaced defenders to open the scoring early in the first half, with the 20-year-old adding a second shortly before the break, poking in after a run from the halfway line.

Belgium have 25 points, eight ahead of second-placed Croatia, who will finish second and facing the prospect of needing to come out on top in the play-offs to secure their place in Brazil.

In Friday's other Group A game, Simon Church gave Wales a 1-0 win over Macedonia.

Wales leapfrog Scotland into fourth place in the table, with the Scots at home to Croatia on Tuesday and the Welsh going to Belgium in the final round of fixtures.

Italy were already assured of a place in Brazil ahead of the 2-2 draw with Denmark, a match in which goalkeeper Gianluigi Buffon made his 137th appearance for the Azzuri to become their most-capped player.

Southampton's Dani Osvaldo opened the scoring for Italy, but two goals by Arsenal striker Nicklas Bendtner looked to have won it for Denmark, only for Alberto Aquilani to net an equaliser in injury time.

Second-placed Bulgaria lost 2-1 to Armenia after being reduced to 10 men. Nikolay Georgiev and Svetoslav Dyakov were sent off for the Bulgarians, before Yura Movsisyan scored a late winner for Armenia.

Czech Republic eased to a 4-1 win at Malta. Bulgaria and Denmark are on 13 points, with Czech Republic and Armenia - fourth and fifth respectively - on 12 points.

Germany cemented their place at next year's World Cup with a comfortable 3-0 win over the Republic of Ireland.

They are five points clear of Sweden, who beat Austria 2-1 with goals from Norwich's Martin Olsson and Paris St-Germain striker Zlatan Ibrahimovic to ensure they will not finish lower than second.

In the group's other game, Faroe Islands drew 1-1 with Kazakhstan.

Who goes into the play-offs?

The nine group winners qualify directly for the finals and the eight runners-up with the best record against the teams finishing first, third, fourth and fifth in their section going into the play-offs.

Currently, thesecond-place team in Group B looks in danger of missing out.

Robin van Persie scored a hat-trick to become the Netherlands' all-time record goalscorer as the Dutch, who have already qualified, emphatically beat Hungary 8-1.

The Manchester United striker scored in the 15th, 42nd and 52nd minutes to surpass Patrick Kluivert with 41 international goals. Kevin Strootman, Jeremain Lens, Rafael van der Vaart and Arjen Robben also scored, while a Szilard Devecseri own goal capped a miserable night for Hungary, who slip to fourth in the group.

Turkey move up to second after beating Estonia 2-0, while Romania defeated Andorra 4-0.

Turkey and Romania both have 16 points heading into the final round of qualifiers.

Goals from Xherdan Shaqiri and Michael Lang gave Switzerland a 2-1 win over Albania and ensured their place at next year's World Cup.

The Swiss, who qualify for their third successive World Cup, have 21 points - five ahead of Iceland, who beat Cyprus 2-0.

That means the battle for second place is between Iceland and Slovenia, who eased to a 3-0 victory against Norway thanks to Milivoje Novakovic's hat-trick.

Russia, hosts of the 2018 World Cup, moved a step closer to qualifying for next year's tournament with a 4-0 win in Luxembourg.

Russia were 3-0 up at half time thanks to goals from Alexander Samedov, Victor Faizulin and Denis Glushakov, before Alexander Kerzhakov added a fourth midway through the second half.

That puts them three points ahead of Portugal, who drew 1-1 with Israel. Ricardo Costa's first-half goal was cancelled out by Eden Ben Basat's late strike.

Northern Ireland suffered their fifth defeat in qualifying as they lost 2-0 to Azerbaijan.

There is all to play for in Group G as Bosnia and Greece both head into the final round of qualifying level on 22 points.

Bosnia beat Liechtenstein 4-1 and are top on goal difference, while Greece edged Slovakia 1-0 thanks to an unfortunate Martin Skrtel own goal.

The Liverpool defender had passed the ball back to goalkeeper Jan Mucha, but it ran under his foot and into his own goal.

Greece host Liechtenstein in their final group game, while Bosnia are in Lithuania.

England head into the final round of qualifying top of the standings thanks to a 4-1 win over Montenegro at Wembley.

They are one point ahead of Ukraine, who edged Poland 1-0, Andriy Yarmolenko scoring the game's only goal.

Xavi Hernandez and Alvaro Negredo scored as world and European champions Spain moved to within a point of qualifying for next year's World Cup with a 2-1 win over Belarus. Sergei Kornilenko pulled one back for the visitors late on.

They have 17 points, three ahead of France.