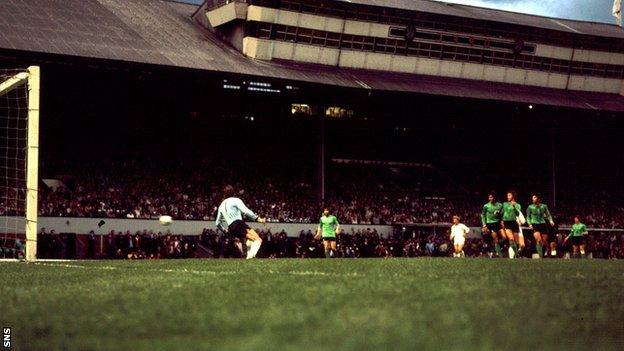 Fans of the French Ligue 1 club believe they would have won rather than lost the 1976 European Cup final 1-0 to Bayern Munich had the posts been round.

St Etienne president Roland Romeyer, whose club are to house them in a new museum, said: "People remember the epic and going down the Champs-Elysees.

"This is a very powerful symbol. They will be delivered shortly and we'll have a little ceremony."

These square goalposts were in part a symbol of this 1976 final, which created an emotional tie between the French people and AS Saint-Etienne

Strikes by St Etienne's Dominique Bathenay and a Jacques Santini header hit the woodwork at Hampden in that final against the Germans.

Hampden used the iconic posts from 1903 until 1987 before regulations from world governing body Fifa meant they had to be replaced.

They have since been stored at the Glasgow stadium's Scottish Football Museum.

The French club have paid 20,000 euros for the posts and they will be housed in St Etienne's future museum, which is due to open on 21 December.

"We've been working on this museum for more than 10 years," added Romeyer.

"These square goalposts were in part a symbol of this 1976 final, which created an emotional tie between the French people and AS Saint-Etienne."