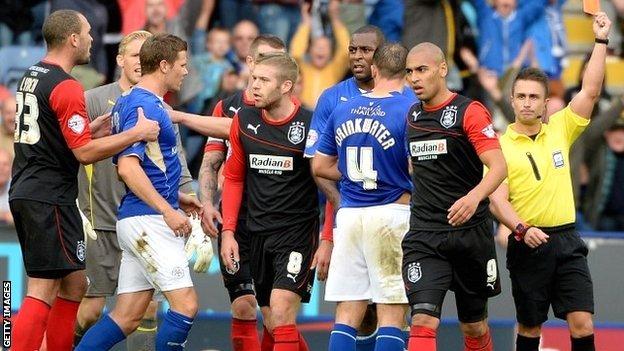 Leicester returned to winnings ways in an action-packed clash with Huddersfield, who slipped to a sixth consecutive defeat.

An own goal by Anthony Gerrard made it 2-0, but Huddersfield hit back with an own goal from Paul Konchesky.

Vaughan saw red for pushing Marcin Wasilewski, as Leicester moved a point away from the Championship's top two.

Ton up for Konchesky

The Foxes had gone six games without defeat before last weekend's 1-0 loss at Doncaster where goalkeeper Kasper Schmeichel was at fault for the goal.

But he made up for that error from the start by denying Vaughan with a super stop after a low cross from Paul Dixon.

The Foxes then compounded the missed chance by netting in the 10th minute. David Nugent broke clear from the halfway line and set up Vardy, who hammered home a great shot from the right channel.

Nugent could have doubled the lead before Vaughan drove in a fierce shot from inside the penalty area that again brought the best out of Schmeichel.

With Leicester holding firm, the Foxes increased their lead in the 38th minute. Anthony Knockaert put over an in-swinging corner and, under pressure from Wes Morgan, Terriers defender Gerrard headed into his own net.

Leicester grew in confidence and created several more chances, with Huddersfield's Alex Smithies the busier of the two goalkeepers.

But in the 67th minute Huddersfield, substitute Sean Scannell, brought on six minutes earlier, went round Wes Morgan and his low shot was deflected into the net by Konchesky on his 100th Leicester appearance.

The Foxes had a penalty appeal turned down, but Huddersfield's chances of an equaliser were diminished when Vaughan was sent off for flattening Wasilewski with a two handed push in the back.

"I wouldn't expect anything less than Kasper bouncing back [after his error at Doncaster] and playing like that.

"Since I have been at the club, he has won us an awful lot of points.

"I was delighted with our performance and felt we deserved to win. I would back us to go out and outplay our opponents."

"There should have been two red cards because there was a definite elbow thrown by Wasilewski.

"Vaughan felt aggrieved about that and, although his reaction was not great, if there were red cards, there should have been two.

"We have been good value for a point and were unfortunate not to come away with anything."