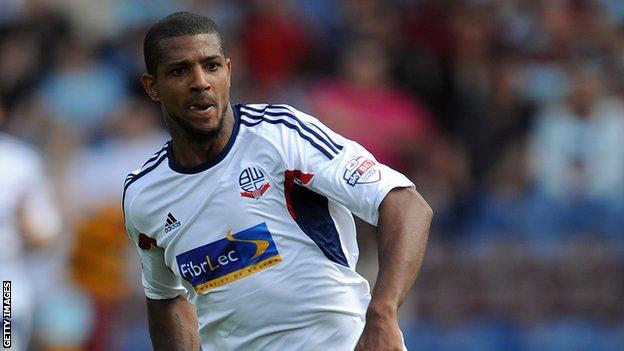 Championship strugglers Bolton and Sheffield Wednesday scored a goal apiece as the sides played out a compelling draw at the Reebok Stadium.

Jermaine Beckford put the hosts ahead in the early stages, but Alex Baptiste headed into his own net to equalise.

Wednesday's Jermaine Johnson had a second-half header ruled out, before team-mate Jose Semedo was sent off late on for a foul on Jay Spearing.

The Owls remain the only club without a win in the Championship. They have now drawn seven of their previous nine games, including the last three

Wednesday came into the match in the final relegation spot, two points and two places behind opponents Bolton who were in 20th, but the visitors started the brighter.

Giles Coke shot wide when picked out by Michail Antonio, and Wanderers goalkeeper Adam Bogdan produced a smart stop when Matty Fryatt was played through on goal.

Buoyed by the reprieve, Bolton went ahead against the run of play when Beckford stroked home his second goal in as many games after being found by a sublime flick by Neil Danns.

The equaliser came in fortuitous circumstances, as Baptiste turned a teasing Jeremy Helan cross into his own net.

Dave Jones's players controlled the match into the second half and looked to have gone in front after Johnson reacted quickest after a Stephen McPhail free-kick was deflected to him.

The Hungarian's opposite number Kirkland then had to be at his best after Semedo was sent off for a two-footed tackle on Spearing six minutes before the end.

Kirkland kept his side in the game as two superb saves from Tim Ream and Baptiste's headers followed to ensure that Bolton's late push was not rewarded with a win.

"We started very well and were playing some fantastic stuff. Jermaine scored a beautiful goal, but once again at home there was a huge piece of misfortune for us with the own goal.

"We showed great courage to try to force a winner and had four or five really good chances to do that.

"As soon as anybody leaves the ground then you run the risk of being sent off. Semedo's jumped off the floor and committed a dangerous tackle on Jay Spearing. For the goal, the guy's a yard offside and the assistant referee's done very well to spot it."

"It wasn't a sending-off, they had a youngster who should have been sent off and it should have been a goal. Hopefully, Chris [Foy, referee] will review it and see that the lineslady was very quick in lifting her flag and I can't see where the offside is.

"As for the red card, you can normally tell by the reaction of players and that's what Semmy is all about. That's not his game, that's why he was so upset. His foot has slid across the floor and he's taken the ball. I just feel that some of the big decisions weren't right and we'll certainly be appealing.

"I can't fault my players' efforts because they were fantastic throughout. Chris Kirkland has pulled off two terrific saves at the end but, up until the sending-off, there was only one winner for me."